NRA splits with PR firm, lobbyist and TV amid infighting 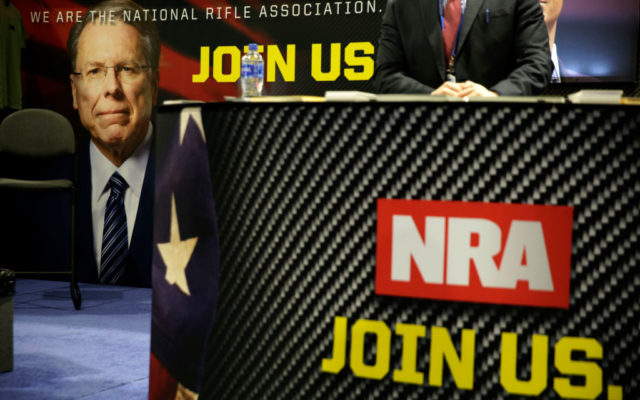 By LISA MARIE PANE Associated Press
Infighting at the National Rifle Association exploded Wednesday, when the powerful association severed ties with its longtime public relations firm, suspended operations of its fiery online TV station and lost its top lobbyist.
The latest turmoil emerged just a year before the critical 2020 presidential elections when the NRA’s ability to influence the outcome could decide the fate of gun rights.
Lobbyist Chris Cox, long viewed as the likely successor to longtime CEO Wayne LaPierre, was placed on administrative leave about a week ago by the NRA, which claimed he was part of a failed attempt to extort LaPierre and push him out.
It also came within hours of the association officially severing ties with Ackerman McQueen, the Oklahoma-based public relations firm that has shaped some of the NRA’s most memorable messages in the past decades.
Cox had been the executive director of the NRA’s lobbying arm, the Institute for Legislative Action, since 2002. He was credited with leading efforts to allow a decadelong ban on “assault weapons” to expire in 2004, an achievement that allowed the gun industry to resume selling what the industry calls “modern sporting rifles” and critics claim are used too often to exact mass carnage.
His resignation was confirmed by NRA spokesman Andrew Arulanandam. No other comment was immediately made about his departure.
Cox did not immediately return a message seeking comment. However, when he was suspended, Cox said in a statement obtained by The New York Times that allegations he had been part of a group seeking LaPierre’s ouster were “offensive and patently false.”
“For 24 years I have been a loyal and effective leader in this organization,” he said.
Cox played his usual prominent role at the NRA’s annual meeting in Indianapolis in April, and there was little public evidence that he and LaPierre or the NRA’s board of directors were at odds. Infighting spilled out during what is normally a pep rally of sorts among gun-rights enthusiasts when Oliver North , then the NRA president, threatened to expose questionable personal and travel expenses unless LaPierre stepped down. Instead, LaPierre turned the tables on North and accused him of trying to extort him into submission.
Joel Friedman, a longtime NRA board member, told The Associated Press his first reaction when he heard that Cox was stepping down was surprise. He said he saw no indications during the annual meeting that Cox was in a dispute with LaPierre.
LaPierre announced Cox’s resignation in an email sent Wednesday to staff and NRA board members that was obtained by the AP. The letter also said an investigation will continue into allegations that North sought to extort LaPierre and that the storied Marine veteran was aided by Cox, a claim first laid out in a lawsuit filed June 19.
In the past few months, the NRA has filed several lawsuits against Ackerman McQueen, accusing it of refusing to document its billings and of seeking to undermine the association. Ackerman McQueen has countersued, claiming the NRA is trying to renege on its financial obligations and smear the public relations firm.
Last year, NRA began asking all of its vendors for detailed documentation about its billings after New York authorities began threatening to investigate the NRA’s nonprofit status. The NRA was founded shortly after the Civil War and is chartered in New York, giving that state broad authority to investigate its operations.
During its two decades by the NRA’s side, Ackerman McQueen was responsible for crafting the association’s aggressive messaging, including the now-famous “From my cold dead hands” line uttered by actor Charlton Heston in 2000 as he vowed to resist any effort to take away his guns. The line became a rallying cry for gun owners around the country.
Ackerman McQueen also created and operated NRATV. In a statement posted Wednesday on the NRA website, LaPierre said it would no longer be airing live programming and would be evaluating the station’s future. It wasn’t clear what would happen to its prominent hosts but there appeared to be no signs those on-air personalities, who are employees of Ackerman McQueen, would find spots at the NRA.
In a lawsuit, the NRA said some of its members had questioned NRATV’s weighing in on “topics far afield of the Second Amendment.”
In a statement Wednesday, Ackerman McQueen accused the NRA of trying to avoid its financial obligations by shuttering NRATV and implied its financial woes are partly the result of now paying for high-priced lawyers.
“When given the opportunity to do the right thing, the NRA once again has taken action that we believe is intended to harm our company even at the expense of the NRA itself,” the company said.
“For Ackerman McQueen, it is time to move on to a new chapter without the chaos that has enveloped the NRA,” the statement continued. “Ackerman McQueen will continue to fight against the NRA’s repeated violations of its agreement with our company with every legal remedy available to us, but we will always be proud of the work that we completed during our 38-year relationship on behalf of the individual citizens that are the NRA.”