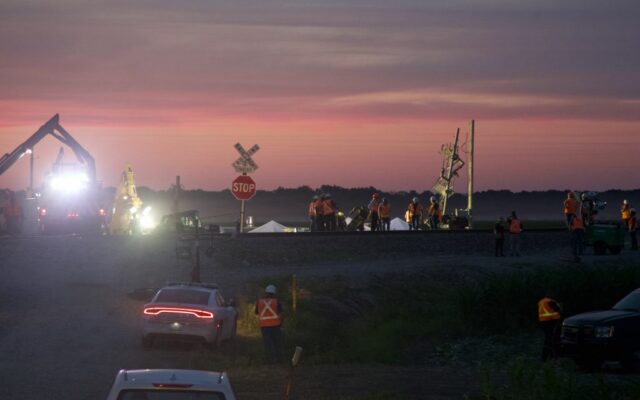 MISSOURI, USA - JUNE 27: A view of the site after an Amtrak train, with 243 passengers, derailed after hitting a dump truck in Missouri, United States on June 27, 2022. According to the company multiple passengers injured. (Photo by Ashlin Wang/Anadolu Agency via Getty Images)

(MENDON, Mo.) — Federal investigators are working to determine if an Amtrak train was traveling at a speed limit of 90 mph when it plowed into a dump truck at a Missouri railroad crossing, killing four people and injuring 150, officials said.

Jennifer Homendy, chairman of the National Transportation Safety Board, said she expects investigators to know by the end of Wednesday the exact speed of the train after analyzing information from its event recorder.

“In this area the speed limit is 90 miles per hour,” Homendy said at a news conference on Tuesday afternoon.

The crash unfolded at 12:43 p.m. Monday, when the Amtrak train — comprised of two locomotives, six coach cars, cafe car and a baggage car — crashed into the rear of a truck hauling aggregate, or crushed rock, to a nearby Army Corps of Engineers project. The collision caused the train to completely derail, sending the locomotive and cars toppling onto their sides, according to the NTSB.

The train was en route from Los Angeles to Chicago with 275 passengers and 12 crew members on board at the time of the crash, Amtrak said. Three people aboard the train were killed and 150 passengers and crew were injured. A person in the dump truck was also killed.

Homendy said the crash occurred at what she described as a “passive crossing” that was not controlled by railroad crossing bars, flashing warning lights or bells.

Homendy expressed frustration that NTSB recommendations made as far back as 1998 to upgrade passive crossings to “active crossings” — ones that are controlled by crossing bars, lights and bells — have not been heeded.

She said the cost of upgrading the crossing grade where the wreck occurred would have cost roughly $400,000.

Homendy said she confirmed with the director of the Missouri Department of Transportation that the crossing was on a list of crossings they wanted to upgrade.

She said the funds to upgrade the crossing would come from Chariton County, the state and the BNSF Railway, which owns and operates the track.

The NTSB also recommended in 1998 that roadway vehicles include technology for roadway that could alert drivers of the presence of a train on an approach to a grade crossing.

“We still don’t see action on that. It’s been 24 years and that recommendation is still as important today as it was in 1998. Lives could be saved,” Homendy said.

Mike Spencer, a farmer in the Mendon area, told ABC affiliate station KMBC in Kansas City, Missouri, that he’s warned local officials that the crossing was dangerous, particularly for drivers unfamiliar with the crossing. Spencer said the crossing has a steep incline that rises 6 feet and because the railroad tracks sit at an angle, it’s difficult to see train approaching trains.

Spencer said he was once almost hit by a train at the same crossing.

“I was afraid this was going to happen to somebody that was not really familiar with the crossing and how to approach it,” Spencer said. “It’s just a nightmare. I look at this and I just can’t believe it.”

Spencer said he has been working with the Chariton County commissioners to make some safety changes at the crossing and other and others in the area. He said he thought the changes were going to be made in 2021, but they were put off.