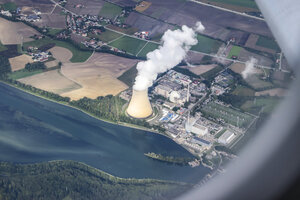 FILE - Steam gushes out of the cooling tower of the Isar 2 nuclear power plant in Essenbach, Germany, Sept.13, 2022. The operator of one of Germany's three remaining nuclear power stations said Monday, Sept. 19, 2022, that it has detected a leak that will require the plant to be shut down for several days of maintenance next month if it is to remain on stand-by beyond the end of this year. (Jan Woitas/dpa via AP, File)

BERLIN (AP) — The operator of one of Germany’s three remaining nuclear power stations said Monday that it has detected a leak that will require the plant to shut down for several days of maintenance next month if it is to keep going beyond the end of the year.

The announcement by PreussenElektra, a subsidiary of utility giant E.ON that operates the Isar 2 facility in Bavaria, puts pressure on the German government to decide if it wants to stick to its long-held plan of shutting all the country’s nuclear plants this year, to keep them on stand-by or to run them for as long as possible.

Germany’s economy minister said earlier this month that he favored shutting one down and keeping two on stand-by, thereby balancing political commitments, nuclear safety at the ageing plants and the risk of possible winter energy shortages. Opposition lawmakers and some in government want them to keep running.

The German Environment Ministry said it was informed by PreussenElektra last week about an internal valve leak which won’t require repair if the plant closes as originally planned on Dec. 31. For Isar 2 to operate beyond the end of the year, however, the company would need to repair the leak, necessitating a weeklong shutdown.

In a statement, PreussenElektra said it was confident it could work with the government to create the necessary conditions to operate Isar 2 beyond Dec. 31 and thereby provide “a contribution to a secure electricity supply during the coming winter.”

“Due to the lead time required, it is necessary, however, that the ongoing political discussions now swiftly lead to a clear result and planning certainty is soon achieved for all involved,” the company said.

The Environment Ministry, which oversees nuclear safety matters, said the information provided by PreussenElektra contains “significant new facts” that need to be taken into account when assessing whether nuclear plants will be available for electricity production after Dec. 31.