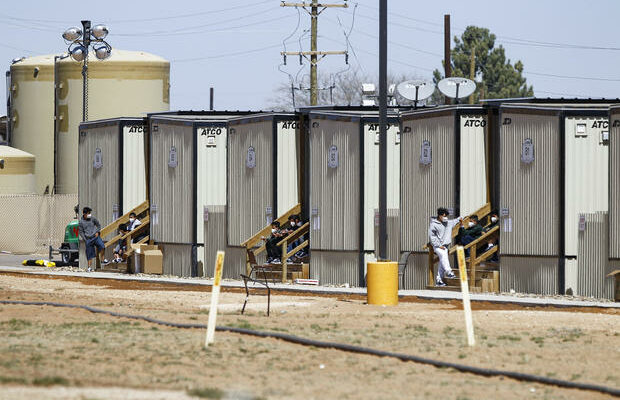 As of Saturday morning, more than 5,000 unaccompanied minors were being held in a Customs and Border Protection (CBP) tent holding facility in south Texas and other stations along the border with Mexico. According to the government records, unaccompanied children are spending an average of 136 hours in CBP custody, well beyond the 72-hour limit outlined in U.S. law.

More than 9,400 unaccompanied minors entered U.S. border custody last month, a record-high for a February. That number is expected to be eclipsed by the figure for March, as border officials have encountered an average of more than 500 unaccompanied minors per day in the past 21 days, according to the government data.

The refugee agency within HHS is charged with housing most unaccompanied minors until it can place them with family members or other sponsors in the U.S. Because of the high numbers of unaccompanied children crossing the southern border and the limited bed space in its state-licensed shelters, the U.S. refugee agency has been forced to open makeshift housing facilities to get children out of Border Patrol custody.

On Saturday, HHS notified Congress that it would be opening a new influx facility in Pecos, Texas, that is initially expected to house approximately 500 unaccompanied children, according to a notice obtained by CBS News. HHS said the installation, a former housing facility for oil workers, could be expanded in the future to house up to 2,000 minors.

The Pecos facility would become the fourth influx or emergency housing facility for unaccompanied minors opened by the Biden administration, which is scrambling to find bed space for the soaring number of children arriving at the U.S.-Mexico border without parents or legal guardians. The Trump administration used three influx facilities for migrant children over four years.

Last month, the U.S. refugee agency reopened a Trump-era influx facility in Carrizo Springs, Texas. With the help of the Federal Emergency Management Agency, the refugee office has also converted a Dallas convention center and a camp for oil workers in Midland, Texas, into emergency sites to receive unaccompanied teenagers stuck in Border Patrol facilities, most of which were built to detain migrant men.

The figures reviewed by CBS News on Saturday show the U.S. government continues to struggle to reduce the record-high backlog of children in U.S. border custody, even as it opens new housing facilities and expands bed capacity at state-licensed shelters.

“The staggering number of children in CBP custody is both heartbreaking and profoundly concerning,” Neha Desai, a lawyer representing migrant minors in a landmark court case, told CBS News.

Last week, Desai and her colleague at the National Center for Youth Law, Leecia Welch, interviewed migrant minors held at the Border Patrol tent holding facility in Donna, Texas. According to Desai, the children reported taking turns sleeping on the floor because of overcrowded conditions; not being able to call family members; and showering once in as many as seven days.

Desai said she believes “the Biden administration is committed to humanely addressing the humanitarian situation we now face,” but that “time will tell whether the government’s good intentions and hard work will translate into the critical changes that are urgently needed.”

Wise warned the overcrowded conditions were not “sustainable,” saying the holding capacity along the southern border could begin to unravel.

Since the Centers for Disease Control and Prevention (CDC) allowed shelters to relax social distancing measures and return to pre-pandemic capacity in early March, the U.S. refugee office has reactivated more than 500 beds, an agency spokesperson told CBS News earlier this week.

While the refugee agency is no longer considering using a military base in Virginia or a NASA installation in northern California to house unaccompanied children, it is still evaluating other sites, according to Weber, the HHS spokesman.