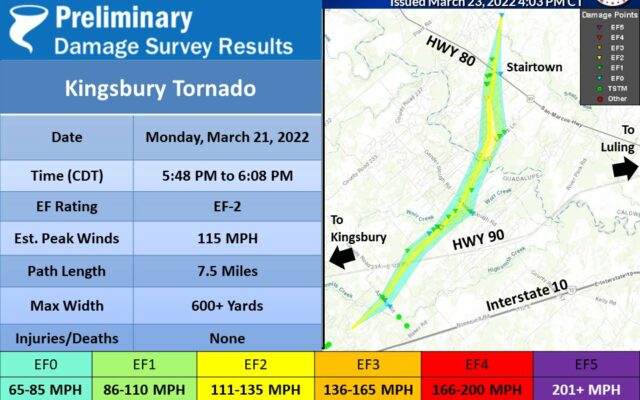 SAN ANTONIO (KTSA News) — The National Weather Service released preliminary information on three of the tornadoes that touched down in Central Texas.

The Austin/San Antonio branch of the NWS said surveys will also continue today in Jarrell and Giddings.

According to the preliminary information released on Wednesday, the NWS said three EF-2 tornadoes touched down on Monday in Elgin, Kingsbury and in a line from Round Rock to Granger.

In North Texas, the NWS reported that 10 tornadoes touched down including an EF-3 in Jacksboro and EF-2 in Greyson County.

The tornadoes reportedly hit a maximum wind speed of 130 mpg in Elgin and Kingbury, and up to 135 mpg in the Round Rock to Granger twister.

In a detailed statement, the NWS said the Kingsbury tornado developed west of Seguin, dropping large hail across Guadalupe County. The storm began to rotate east of Seguin, meteorologists said, and tightened as it crossed I-10 at approximately 5:48 p.m.

The tornado reportedly revealed about 7.5 miles in 20 minutes.

According to the report, four homes and two barns were damaged in the tornado. The tornado damaged two homes across it crossed Highway 90, one of which reported significant damage to the roof and the other reportedly lost some shingles. The home that sustained more damage also reported their RV was swept nearly 100 feet away from where it was parked for it hit a tree and was destroyed.

The NWS said the tornado crossed Gander Slough Road at Woodrow Center Road and moved through a green area along the San Marcos River where it uprooted and snapped several large trees.

As the tornado moved northeast and then north, the NWS said, it hit another home and swept a 4-person ATV across the property. The report states that two large trees estimated to be more than 300 years old were either snapped or fully uprooted.

The tornado reportedly crossed Highway 80 and hit another home, damaged an old RV before losing steam northeast of Stairdown and dissipating near FM 671 around 6:08 p.m.

The NWS said those ratings could change as more information becomes available from additional photos, drone footage and flyovers.