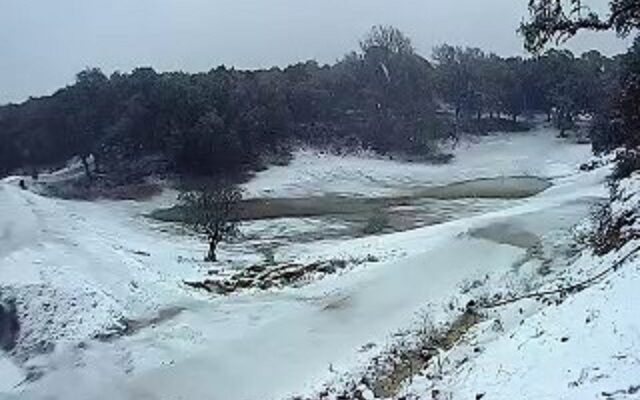 SAN ANTONIO (KTSA News) – If you’re driving to areas north of San Antonio in Central Texas early Monday, watch for patches of ice and snow on the roads.  Meteorologist Jason Runyen with the National Weather Service says areas of Austin, Round Rock and Georgetown got 2 to 6 inches of snow Sunday.

“When you get into the northern portions of  Austin, and up towards Round Rock, Georgetown, into the Temple area, there are still some patchy spots on the roadways that have some ice and snow,” said Runyen.

Snow and ice knocked out power to thousands in Central Texas.  Austin Energy says at one point, nearly 40 thousand customers had their power knocked out.

Hays County offices weren’t scheduled to open until 10 a.m.  because of possible snow and ice on the roads.   Williamson County officers are closed because of the weather.

Several Hill Country school districts and some in areas north of San Antonio are either canceling or delaying classes today because of the winter weather. Classes are called off in more than 20 districts, including Burnet, Georgetown, Johnson City, Pflugerville, and Round Rock.  Classes are delayed two-hours in nearly a dozen districts, including Bastrop, Flatonia, Luling, Marble Falls, and others. Classes in the Austin Independent School District  will be 100-percent remote today.

Areas of northern Bexar County got some flurries, but parts of Comal County got up to a half-inch of snow.

“As you look toward Blanco and Johnson City, that region picked up a couple of inches,” Runyen said.

It’ll be cold in San Antonio Monday with high temperatures in the 40s, but Runyen says we can expect a hard freeze early Tuesday.

“Temperatures anywhere from the mid 20s across the northern portion of Bexar County to the upper 20s in the downtown area, so it’ll be a pretty widespread hard freeze Tuesday morning,” Runyen said.  However, no precipitation is expected.