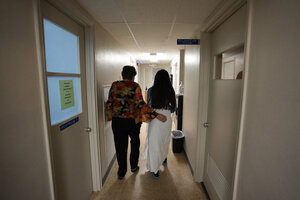 A 33-year-old mother of three from central Texas is escorted down the hall by clinic administrator Kathaleen Pittman prior to getting an abortion, Saturday, Oct. 9, 2021, at Hope Medical Group for Women in Shreveport, La. The woman was one of more than a dozen patients who arrived at the abortion clinic, mostly from Texas, where the nation's most restrictive abortion law remains in effect. (AP Photo/Rebecca Blackwell)

OKLAHOMA CITY (AP) — Two abortion providers in Oklahoma said Tuesday that they’re still being inundated with women from Texas who want to terminate their pregnancies after Texas last year passed the most restrictive anti-abortion law in the U.S. in decades.

Officials with Trust Women and Planned Parenthood Great Plains, which both operate abortion clinics in Oklahoma City, said some women from Oklahoma are being forced to seek abortion services in other states because of two-week wait times for services in Oklahoma.

“Our phones have not stopped ringing in the last six months,” said Rebecca Tong, co-executive director of Trust Women. “We’re being forced to turn people away in desperate situations.”

Tong said the clinic has added an additional physician and the clinic is open more days per week but it still has longer wait times, which leads to longer pregnancies, more complications and an increased likelihood that a woman will have to receive a surgical procedure instead of a medication-induced abortion.

Statistics released last week by the Texas Health and Human Services Commission show abortions in Texas fell by 60% in the first month after the new law took effect that bans the procedure once cardiac activity is detected, usually around six weeks of pregnancy, without exceptions in cases of rape or incest.

Tong said the company’s Oklahoma City clinic went from seeing 12 Texas patients in August to 130 in September after the Texas law passed. She said their clinic in Kansas saw similar increases.

Emily Wales, interim president and CEO of Planned Parenthood Great Plains Votes, said Planned Parenthood went from seeing about 50 patients from Texas at their clinics in Arkansas, Kansas, Missouri and Oklahoma in the fall of 2020 to more than 1,000 last year.

Tong, Wales and other abortion rights advocates say they’re particularly concerned the Oklahoma Legislature intends to follow Texas’ lead and pass a similar bill or even more onerous restrictions that could bring an end to abortion services in Oklahoma altogether.

Oklahoma lawmakers have introduced more than a dozen bills this year to further restrict or prohibit abortions in Oklahoma, including measures that make it a felony crime to perform or receive an abortion.

Meanwhile, hundreds of anti-abortion activists are expected to descend on the Oklahoma Capitol on Wednesday for the annual Rose Day where they present red roses meant to signify the lives of the unborn and encourage the passage of anti-abortion bills.

Tony Lauinger, chairman of Oklahomans for Life and a longtime anti-abortion activist in Oklahoma, said that while he’s “greatly concerned” at the increase in the number of abortions being performed in Oklahoma, he’s also optimistic that the U.S. Supreme Court has agreed to hear a legal challenge that could lead to the historic Roe v. Wade decision legalizing abortion to be overturned or limited.