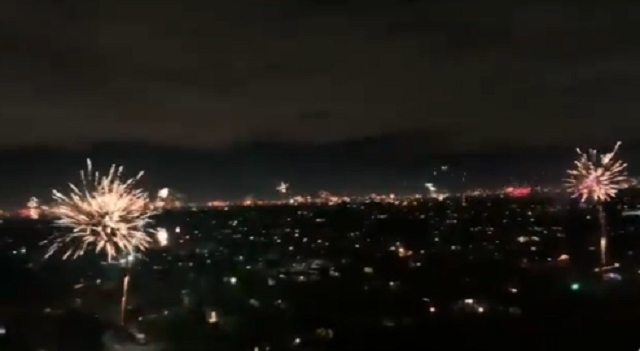 SAN ANTONIO (KTSA News) -It’s illegal to pop fireworks within the city limits of San Antonio and if you’re caught, you could get a fine of up to $2,000.

If you were in San Antonio on New Year’s Eve  and you stayed awake until the stroke of midnight, you probably saw or heard fireworks near you. Area residents in every section of town were putting on their own pyrotechnic shows, large and small, but SAPD reports only one written citation was issued and there were a total of 21 verbal warnings from New Year’s Eve until New Year’s morning.

“It is important to note that the vast majority of the fireworks calls we received had ‘no complainants or refused complainants,’ or the officers were dispatched as patrol-bys, where no contact was made with a suspected violator,” SAPD reported. “Additionally, there was no fireworks hotline for this holiday.”

Sunday night, two teens were severely injured in an explosion while they were lighting a fireworks mortar shell.  One had his hands blown apart and the other teen lost some fingers and suffered eye injuries.

They were shooting fireworks while car club members were doing donuts and burnouts in the parking lot of Eisenhauer Road Flea Market.

I love you even more, San Antonio. pic.twitter.com/kv0Cqf3CbO