One man, 22, arrested for having sex with 13-year-old; other man caught breaking into Bexar Co. homes to sexually assault victims 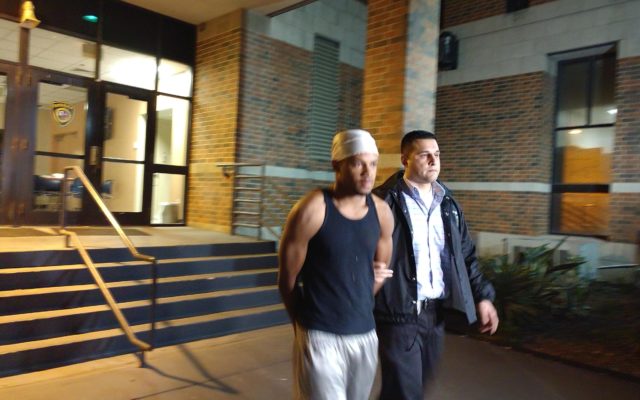 Suspect Trevon Rogers is led on a perp walk at the Bexar County Jail on March 6, 2020. (Photo: KTSA/Dennis Foley)

SAN ANTONIO (KTSA News) — Two men were arrested Friday on separate sexual assault crimes in Bexar County — one involving the sexual assaults of a 13-year-old girl and another involving break-ins with the intent of sexually assaulting the victims.

The first arrest announced Friday night was of 22-year-old Trevon Rogers, who is accused of having a sexual relationship with a 13-year-old girl.

Bexar County Sheriff Javier Salazar said the victim had run away from home and had come to know Rogers in January and February.

The victim ended up in the custody of the sheriff’s office on a separate, undisclosed issue.

The sheriff said Rogers believed the victim was somewhat older than 13, but still believed she was a minor.

Salazar said Rogers posted at least one of the sexual assaults on Snapchat.  The victim found it and deleted it, but found another video of a sexual assault on his phone.

It is possible Rogers may be involved in other, similar sexual assaults.

In this case, the sheriff said it was believed Zelaya was involved in a sexual assault of a woman in her 60s in the area of Crestway and O’Connor.

The sheriff said his office got a call Thursday in the same general area for a burglary with the intent of committing a sexual assault.  The suspect left behind items that led investigators to him.

Salazar said he believes there area more victims in this case.

Zelaya was arrested Friday and confessed to the crime.  He is a Salvadorean national and may be involved in organized crime in El Salvador.

If anyone else may have been a victim of similar crimes committed by these suspects, you are encouraged to contact the Bexar County Sheriff’s Office at 210-335-6070.