OSHA investigating after six killed by tornado at Amazon facility 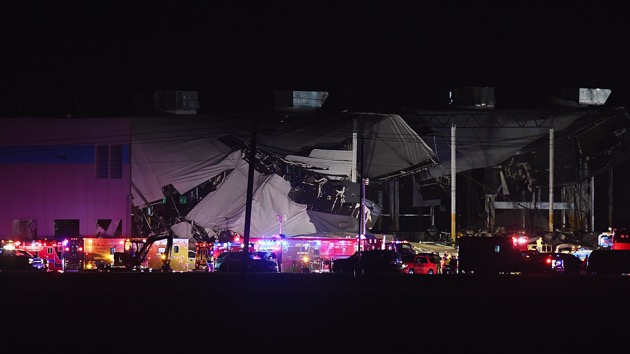 irst responders surround a damaged Amazon Distribution Center on December 10, 2021 in Edwardsville, Illinois. According to reports, the Distribution Center was struck by a tornado Friday night. Emergency vehicles arrived to start rescue operations for workers believed to be trapped inside. (Photo by Michael B. Thomas/Getty Images)

(EDWARDSVILLE, Ill.) — The Occupational Health and Safety Administration has launched an investigation into the collapse of an Amazon delivery station in Edwardsville, Illinois, that left six people dead after a tornado pummeled the facility during the height of the busy holiday shopping season.

OSHA spokesman Scott Allen told ABC News that compliance officers from the agency have been at the complex since Saturday to provide assistance.

“OSHA has six months to complete its investigation, issue citations and propose monetary penalties if violations of workplace safety and or health regulations are found,” Allen told ABC News in a statement. “No further information will be available until OSHA has completed their investigation.”

The Edwardsville Fire Department is still working to clear debris from the Amazon site and transition the property back to the company’s control as of Monday, city officials said in a statement on Facebook, saying the transition will take place “in the near future when emergency crews have completed their efforts.”

As of Monday, everyone reported having been at the Amazon facility when the tornado struck on Friday evening has been accounted for, and there are no further reports of missing individuals. One individual remains hospitalized with “serious injuries,” the city’s statement added, and six people have died.

“We’re deeply saddened by the news that members of our Amazon family passed away as a result of the storm in Edwardsville,” Kelly Nantel, an Amazon spokesperson, told ABC News in a statement Monday. “Our thoughts and prayers are with the victims, their loved ones and everyone impacted by the tornado. We also want to thank all the first responders for their ongoing efforts on scene. We’re continuing to provide support to our employees and partners in the area.”

Edwardsville city officials identified the names of the six deceased on Sunday, who ranged in age from 26 to 62.

Among the victims identified by authorities was Larry Virden, 46, whose daughter Justice Virden told ABC News’ Rob Marciano for Good Morning America, “I walked out of that building after they told me my dad was gone, and I dropped to my knees and screamed at the sky at the top of my lungs.”

“The family members we represent are deeply distraught and want answers to their questions. We are seeking to determine if Amazon did everything in its power to warn employees of the incoming danger from the tornado and provide a designated safe area for employees to shelter,” Crump said in a statement Monday evening.

“We are asking Amazon employees who worked at the fulfillment center to assist us with our investigation and help us understand what warnings were given and what procedures followed,” the statement added.

One tornado out of a barrage that raged through six states late Friday touched down just outside of the Edwardsville Amazon facility at around 8:30 p.m. local time, according to Edwardsville Fire Chief James Whiteford.

Whiteford also said that a shift change was going on when the tornado struck, causing further confusion for rescue efforts regarding how many workers were in the building at the time.

The building directly impacted by the storm was a delivery station that had opened in July 2020, according to Amazon, and was approximately 1.1 million square feet with approximately 190 employees across multiple shifts.

Amazon said it was donating $1 million to the Edwardsville Community Foundation, in addition to working with local officials to assist with recovery efforts. The company also said it was reaching out to the victims’ families to see how it can best support them.

The company said the site received tornado warnings and alerts, and employees worked quickly to ensure as many people as possible could get to a designated shelter-in-place location. In this case, the site got tornado warnings between 8:06 and 8:16 p.m. local time, and site leaders directed people on site to immediately take shelter. It appears the tornado formed in the parking lot and struck the building at 8:27 p.m., according to Amazon, which said it all happened incredibly fast.

The majority of the workers took shelter in a primary designated location, and a small group took shelter in another part of the building that was then directly impacted by the tornado, according to Amazon, which said this is where most of the deaths occurred.

Amazon founder Jeff Bezos, who stepped down as CEO of the e-commerce giant earlier this year, reacted to the news on Twitter late Saturday. Bezos took some heat from critics on social media for a seemingly delayed response as his private space-tourism firm Blue Origin was launching a crew — that included ABC News’ Michael Strahan — on a suborbital jaunt earlier Saturday.

“The news from Edwardsville is tragic. We’re heartbroken over the loss of our teammates there, and our thoughts and prayers are with their families and loved ones,” Bezos wrote. “All of Edwardsville should know that the Amazon team is committed to supporting them and will be by their side through this crisis. We extend our fullest gratitude to all the incredible first responders who have worked so tirelessly at the site.”