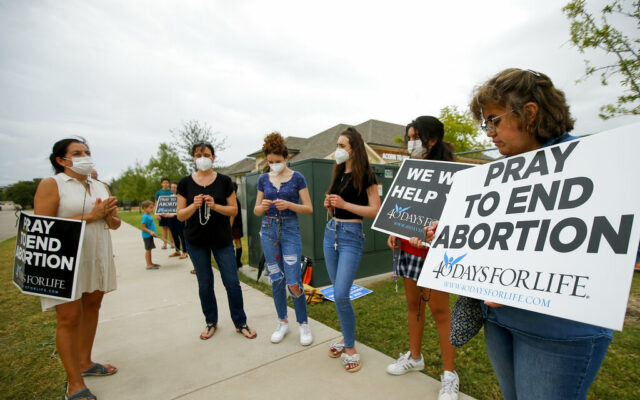 FILE - In this Friday, Oct. 1, 2021, file photo, anti-abortion demonstrators pray and protest outside of a Whole Women's Health of North Texas, in McKinney, Texas. Foes of the strict abortion ban passed in Texas are taking aim at companies that donated money to the bill’s sponsors, hoping consumers will pressure corporate America to join the fight against a surge of abortion restrictions. (AP Photo/Brandon Wade, File)

AUSTIN, Texas (AP) — Eighteen states threw new support behind Texas’ ban on most abortions as the Biden administration waited Thursday for a ruling to determine whether the nation’s most restrictive abortion law will be allowed to remain in place.

The rush to Texas’ defense by the mostly Southern and Midwestern attorneys general reflected the broader stakes and how other Republican-led states might pursue their own versions of Senate Bill 8, which bans abortions once cardiac activity is detected, usually around the sixth week of pregnancy. That is before some women know they are even pregnant.

Texas has had the ban on the books since early September, except for a brief 48-hour window last week after a federal judge in Austin put it on hold. The 5th U.S. Circuit Court of Appeals quickly set that decision aside and is expected to make a more lasting decision in the coming days about whether the law can stay in effect.

U.S. Attorney General Merrick Garland called the law “clearly unconstitutional” while launching a lawsuit against Texas and warned that it could become a model elsewhere in the country unless it’s struck down.

Other states that came to Texas’ defense accused the Biden administration of overstepping by bringing the challenge, while mostly steering clear of the broader arguments about whether the law itself is constitutional.

“The Attorney General has no authority to act as a roving reviser of state law, challenging as unconstitutional any rule with which he disagrees,” Indiana Attorney General Theodore Rokita told the appeals court in a brief filed late Wednesday.

A 1992 Supreme Court decision prevented states from banning abortion before the point at which a fetus can viably survive outside the womb, which is around the 24th week of pregnancy. But Texas’ version has mostly outmaneuvered courts so far because it offloads enforcement to private citizens through civil cases rather than to prosecutors through criminal charges. Citizens are entitled to collect at least $10,000 if they prevail in lawsuits against abortion providers or anyone found to have helped a woman get an abortion after the point at which the heartbeat can be detected.

The Texas attorney general’s office on Thursday again urged the court to leave the law in place while their appeal is pending. Whether the law remains in effect could ultimately wind up back before the U.S. Supreme Court, which last month allowed it to remain in effect without ruling on its constitutionality.