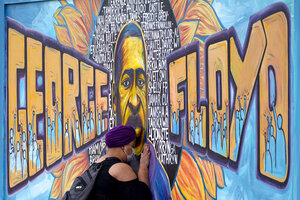 HOUSTON (AP) — A posthumous pardon request was submitted on Monday to Texas officials on behalf of George Floyd for a 2004 drug arrest that was done by a now indicted ex-Houston police officer whose case history is under scrutiny following a deadly drug raid.

The May 2020 killing of Floyd, who was Black, by former Minneapolis police officer Derek Chauvin, who is white, prompted worldwide protests against racial injustice. Chauvin was convicted last week of murder and manslaughter for Floyd’s killing.

Years before his death, Floyd was arrested in Houston — where he grew up — in February 2004 by former police officer Gerald Goines for selling $10 worth of crack in a police sting. Floyd later pleaded guilty to a drug charge and was sentenced to 10 months in a state jail.

Goines is now facing two counts of felony murder, as well as other charges in both state and federal court, for a deadly 2019 drug raid in which Dennis Tuttle, 59, and his wife, Rhogena Nicholas, 58, were killed.

Prosecutors allege Goines, 56, lied to obtain the warrant to search the couple’s home by claiming that a confidential informant had bought heroin there. Goines later said there was no informant and that he had bought the drugs himself, they allege.

More than 160 drug convictions tied to Goines have since been dismissed by prosecutors. A dozen current and former officers, including Goines, who are tied to the narcotics unit that conducted the drug raid, have been indicted in the wake of the fatal shooting of the couple.

Allison Mathis, with the Harris County Public Defender’s Office, alleges Goines also made up a confidential informant in Floyd’s case and “no one bothered to question the word of a veteran cop against that of a previously-convicted Black man.”

Floyd pleaded guilty to avoid a possible 25-year sentence because of his past criminal history, Mathis wrote in her office’s posthumous pardon application to the Texas Board of Pardons and Paroles. The pardon request was first made public Monday by a reporter with The Marshall Project.

A pardon “wouldn’t erase the memory, personal or institutional, of this thing that happened to him, or the things that would happen to him later… It would show that the state of Texas is interested in fundamental fairness, in admitting its mistakes, and in working to increase the accountability for police officers who break our trust and their oaths, and harm our people rather than serve them,” Mathis said.

Several of Floyd’s family members and friends, submitted letters in support of the pardon request. Another person who submitted a letter was Maureen Bishop, a counselor who worked with Floyd in 2012. Bishop wrote that Floyd once talked about his arrest by Goines and didn’t understand why the ex-officer “would lie about innocent people. He said that he had prayed to God that he would help him find peace to forgive him.”

In a statement Monday, Harris County District Attorney Kim Ogg said Floyd was convicted “on the lone word of Gerald Goines, a police officer we could no longer trust. We fully support a request that the governor now pardon George Floyd from that drug conviction.”

A spokesperson for the Texas Board of Pardons and Paroles didn’t immediately reply to an email seeking comment Monday. It was not immediately known how long the board could take before making a decision. If a majority of the board approves the pardon request, it would then forward its recommendation to Texas Gov. Greg Abbott, who would have to give final approval.