Passenger revenue soars at Southwest despite hit from virus 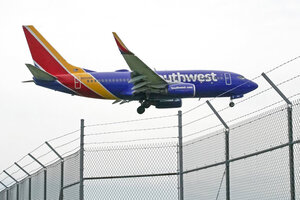 A Southwest Airlines flight lands at General Mitchell International Airport, Wednesday, Oct. 13, 2021, in Milwaukee. Southwest will let unvaccinated employees keep working past early December instead of putting them on unpaid leave if they apply for an exemption on medical or religious grounds. (AP Photo/Morry Gash)

DALLAS (AP) — Passenger revenue almost tripled and Southwest Airlines posted a smaller loss that most had expected, despite slowing air traffic in the third quarter with the spread of the delta variant.

Net income was $446 million, or 73 cents per share, bouncing back from a loss over the same period last year. There were one-time costs that drove a per-share loss of 23 cents, but that’s not as bad as the per-share loss of 27 cents that Wall Street was expecting, according to a survey by Zacks Investment Research.

“Third quarter 2021 was a challenge for us, operationally,” said CEO and Chairman Gary Kelly in a prepared statement. “Despite the deceleration of traffic in August and September due to surging COVID-19 cases, the third quarter 2021 demand and revenue performance was quite strong and a dramatic improvement from a year ago. That was a bright and encouraging sign of recovery.”

A portion of this story was generated by Automated Insights (http://automatedinsights.com/ap) using data from Zacks Investment Research. Access a Zacks stock report on LUV at https://www.zacks.com/ap/LUV