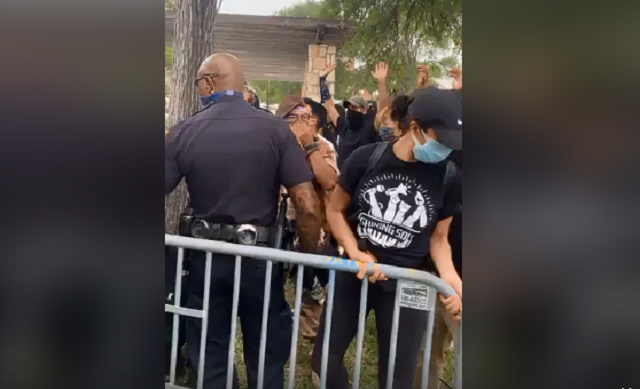 SAN ANTONIO (KTSA News) – A protest at the Christopher Columbus statue Saturday started out peacefully with the burning of herbs during a ceremony accompanied by the gentle sound of a hand drum.  A woman then sang about water and fire, keeping time with a rapid, steady drumbeat.  The crowd joined in the chorus, “Our Indigenous existence is our resistance.”

Antonio Diaz with the Texas Indigenous Council told dozens of protesters at Columbus Park in the Northwestern edge of  downtown San Antonio that changes are coming.  A proposal to remove the statue and return it to the Christopher Columbus Italian Society of San Antonio will go before the city council’s governance committee Tuesday.

The statue was splashed with red paint early Thursday and it was still visible Saturday.  Police Chief William McManus says they’re investigating the case as they try to determine who’s responsible for the vandalism. Diaz said it could have been averted if the mayor had helped push Trevino’s proposal sooner.

“It is going down. That’s the father of the symbol of racism in our Western Hemisphere,” Diaz said as he pointed to the Columbus statue.

A ban on gatherings of more than 10 people went into effect at daybreak Saturday, just hours before the demonstration, but peaceful protests are protected by the First Amendment. Officers surrounded the park, with several of them standing around the statue which had barricades around it.

“We are here to make sure that everybody is able to exercise their First Amendment rights during the protest today and make sure that if there are any counter-demonstrators, there’s peace between the two,” said McManus.

Outside the barricades stood a group of civilians armed with rifles and pistols, who told KTSA News they were peacefully exercising their Second Amendment rights.

John May said he’s tired of seeing people destroy property and monuments just  because they don’t like them.

When asked what he planned to do if someone tried to damage the Columbus statue, he said police would handle it, “and if  any of us are attacked, we will defend ourselves to the fullest extent of Texas law.”

Diaz says the men with rifles antagonized the protesters because “they’re here in a form of intimidation with guns and weapons.  Protesters chanted,”We are angry.  We are not aggressive.”

At one point, some of the protesters broke through the barricades and rushed to the front  of the statue.  The men with rifles then also moved toward the area, but officers quickly separated the groups.

McManus tried to diffuse the situation by talking to leaders of both sides.  He asked the armed civilians to leave, but they refused to go as long as protesters remained at the site.

Pharoah Clark, one of the local leaders of the  Black Lives Matter movement, told the crowd that one of the elders of the Texas Indigenous Council was asking that the demonstration return to a peaceful event.

“We’re all here for the same reason,” Clark told the protesters. He helped move the crowd away from the armed group.

“No justice, no peace,” protesters shouted as they moved away from the barricades.