Pelicans head coach Stan Van Gundy out after one year 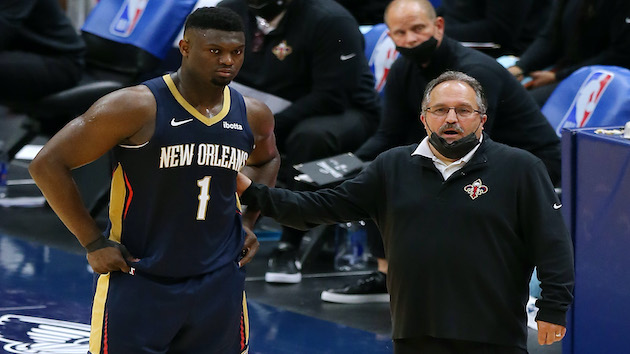 NEW ORLEANS, LOUISIANA - APRIL 20: Head coach Stan Van Gundy of the New Orleans Pelicans and Zion Williamson #1 talk against the Brooklyn Nets during a game at the Smoothie King Center on April 20, 2021 in New Orleans, Louisiana. NOTE TO USER: User expressly acknowledges and agrees that, by downloading and or using this Photograph, user is consenting to the terms and conditions of the Getty Images License Agreement. (Photo by Jonathan Bachman/Getty Images)

The Pelicans finished with a 31-41 record and missed the NBA Playoff Play-In tournament by two games.

According to Wojnarowski, Van Gundy and Pelicans Executive Vice President David Griffin have talked consistently since the end of the season.

Van Gundy and Pelicans EVP David Griffin have been meeting regularly to discuss the future and ending this partnership after just one season started to feel like an inevitable result around the organization, sources said. https://t.co/sAduFLcEiG