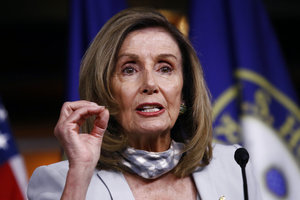 ▶ Watch Video: Pelosi calls for Pence to use 25th Amendment to remove Trump from power
Washington — House Speaker Nancy Pelosi joined a growing list of lawmakers demanding Vice President Mike Pence begin proceedings to remove President Trump from office under the 25th Amendment, saying the House could initiate impeachment proceedings against the president if Pence fails to act in the wake of the attack on the Capitol.”In calling for this seditious act, the president has committed an unspeakable assault on our nation, and our people,” Pelosi said at a press conference at the Capitol Thursday. “I join the Senate Democratic leader in calling on the vice president to remove this president by immediately invoking the 25th Amendment. If the vice president and Cabinet do not act, the Congress may be prepared to move forward with impeachment.”

Pelosi, who is third in line for the presidency, endorsed the move to remove Mr. Trump from office one day after a pro-Trump mob stormed the Capitol and delayed the counting of Electoral College votes. Senate Minority Leader Chuck Schumer and other Democratic lawmakers called on the president to be removed earlier Thursday.

The 25th Amendment gives the vice president and a majority of the Cabinet the power to remove a president from office if they determine he is “unable to discharge the powers and duties of his office.”

“He has clearly indicated that over and over again,” Pelosi said. “And by inciting sedition as he did yesterday, he must clearly be removed from office.

The speaker added that “the best route, the most immediate route, would be the vice president to recognize the danger of a Donald Trump presidency and take this action.”

“I don’t think it will take long to get an answer from the vice president,” Pelosi said. “It would be yes, or it would be no.”

Pelosi also said she was demanding the resignation of the U.S. Capitol Police over the failure to prevent rioters from breaching the Capitol building.

“There was a failure of leadership at the top of the Capitol police and I think Mr. Sund, he hasn’t even called us since this happened,” she said, referring to Capitol Police Chief Steven Sund. “So I had been made aware that I would be saying that we’re calling for his resignation.”

One person was shot and killed by police while three others died of “medical emergencies” during the assault on the Capitol, police said. Rioters managed to break into the Senate chamber and nearly breached the House floor in a standoff with armed guards inside the chamber.

Lawmakers were evacuated from their chambers and remained in a secure location for five hours before the Capitol was secured. They returned to complete the electoral count and affirmed President-elect Joe Biden’s victory in the presidential race early Thursday morning.