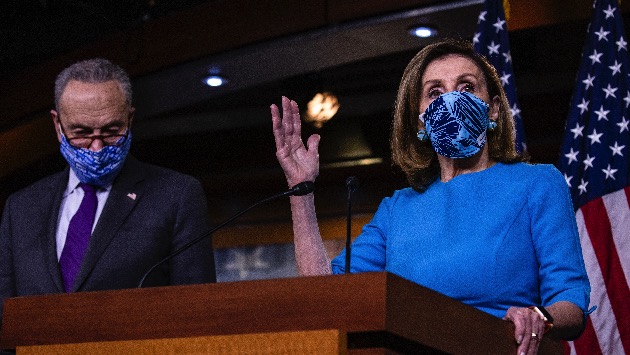 WASHINGTON, DC - NOVEMBER 12: Speaker of the House Nancy Pelosi (D-CA) (R) speaks alongside Senate Minority Leader Chuck Schumer (D-NY) (L) during a joint press conference at the U.S. Capitol on November 12, 2020 in Washington, DC. The two spoke out against the Republicans lack of action towards relief from the second wave of the coronavirus pandemic. (Photo by Samuel Corum/Getty Images)

(WASHINGTON) — House Speaker Nancy Pelosi and Senate Minority Leader Chuck Schumer have one message to Republicans in Congress: it is time to move on from the election and accept Joe Biden as the next president.

Schumer accused Republicans of throwing a “temper tantrum” and expressed confidence that the Biden win is not going to be seriously challenged.

Despite little or no evidence, Senate Majority Leader Mitch McConnell and Republicans continue to back Trump’s legal challenges to the 2020 election results, refusing to acknowledge Biden as the president-elect.

On Tuesday, McConnell suggested they were playing the long game and might not acknowledge the election results until the Electoral College votes on Dec. 14.

McConnell and other GOP leaders continue to maintain that Trump is “100 percent within his rights” as he pursues legal action, though when pressed, none has been able to identify a specific example of large-scale voting fraud that would make a difference in the final outcome.

“Until the Electoral College votes anyone who’s running for office can exhaust concerns about counting in any court of appropriate jurisdiction. It is not unusual it should not be alarming,” McConnell said. “At some point here, we will find out finally who is certified in each of these states and the electoral college will determine the winner and that person will be sworn in on January 20.”

The Trump campaign has filed a number of lawsuits in key states, but nearly all, including in Georgia, have been thrown out. ABC News has reported that internally some of the president’s top advisers have cast doubt on the effectiveness of the legal strategy and the potential to impact the results of the election in any meaningful way.

Despite Republican objections, Schumer and Pelosi are now shifting their focus to passing a coronavirus relief package, which as of right now is stalled in Congress.

Pelosi and Treasury Secretary Steven Mnuchin appeared close to clinching a deal ahead of the election, but those talks devolved and evaporated because the two sides are still billions of dollars apart.

“Words have power. When the president speaks, his words weigh a ton and we’ve heard some things lately that are very disconcerting, but numbers have eloquence, too,” Pelosi said.

Pelosi and Schumer made clear that they have no intention of budging on their demands for a more than $2 trillion pandemic relief bill.

“We’re at the same place even more so, even more so with the pandemic because look at these numbers,” Pelosi said, referring to the rising number of cases nationally.

“What Joe Biden got in this election was a mandate,” Pelosi said.

“This election was maybe more a referendum on who can handle COVID well than anything else. The Donald Trump approach was repudiated. The Joe Biden approach was embraced. And that’s why we think there’s a better chance to get a bill in the lame duck,” Schumer added.

“If only the Republicans would stop embracing the ridiculous shenanigans that Trump is forcing them to do in the election and focusing on what people need,” Schumer said.