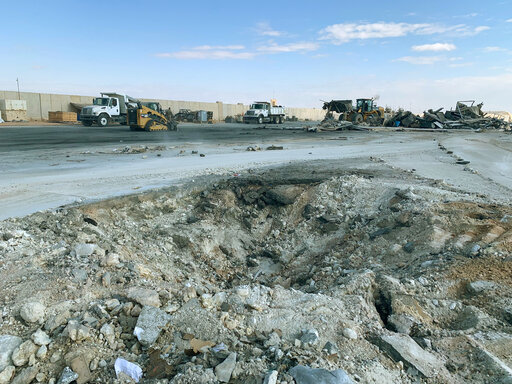 Iranian bombing caused a crater at Ain al-Asad air base in Anbar, Iraq, Monday, Jan. 13, 2020. Ain al-Asad air base was struck by a barrage of Iranian missiles, in retaliation for the U.S. drone strike that killed atop Iranian commander, Gen. Qassem Soleimani, whose killing raised fears of a wider war in the Middle East. (AP Photo/Ali Abdul Hassan)

WASHINGTON (AP) – The Pentagon has raised to 50 the number of U.S. service members who suffered traumatic brain injuries in Iran’s missile strike earlier this month on an Iraqi air base, the third time the number of injuries has been increased.

Trump had initially said he was told that no troops had been injured in the Jan. 8 missile strike on Iraq’s Ain al-Asad air base. Iran carried out the attack as retaliation for a U.S. drone strike in Baghdad that killed Iran’s most powerful general, Qassem Soleimani, on Jan. 3.