Peyton Manning teams up with brother, ESPN for MNF MegaCast 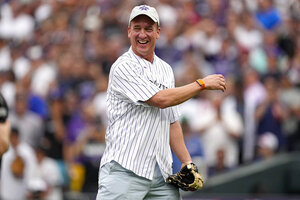 ESPN has finally landed Peyton Manning as a “Monday Night Football” commentator. It’s just not in a way anyone expected, and it won’t be for the full season.

Walt Disney Company announced on Monday a partnership with Manning and his Omaha Productions company in which Peyton and Eli Manning will be part of a “Monday Night Football” MegaCast for 10 games a year the next three seasons.

Manning, who will be enshrined in the Pro Football Hall of Fame next month, has long been rumored as a “Monday Night Football” commentator since he retired after the 2015 season, but the sides were never able to reach an agreement. Now fans will be able to get his views, albeit in a different format and with his brother, who retired last year after leading the New York Giants to two Super Bowl championships.

The Manning’s MegaCast will debut the first three weeks of this season, including the Sept. 13 opener between the Baltimore Ravens and Las Vegas Raiders, with the remaining seven weeks to be announced. It will air on ESPN2 and be streamed on ESPN+ while the standard broadcast will be on ESPN and/or ABC.

MegaCasts had been a staple of ESPN’s coverage of the College Football Playoffs before it expanded to the NFL last year. The Week 2 game between the New Orleans Saints and Raiders averaged 15.59 million viewers on ABC, ESPN, ESPN2 and ESPN Deportes, which was one of the most-watched MNF games of the season. ESPN also brought back the MegaCast for the wild-card round game between Baltimore and the Tennessee Titans.

ESPN chairman Jimmy Pitaro said in a statement that the MegaCast is designed to be a great complement to the traditional telecast. NFL Commissioner Roger Goodell said in April when the league finalized its new 11-year broadcast agreements that the networks would have more leeway for alternate broadcasts.

Amazon, which will become the exclusive outlet for “Thursday Night Football” beginning in 2022, had alternate presentations during its simulcasts with Fox last season. CBS did a kids-focused broadcast of the wild-card game between the Chicago Bears and Saints.

“Offering multiple viewing options for the next three seasons continues our innovation efforts and provides additional value for our fans,” Pitaro said. “Peyton and Eli will bring a different approach, delving into conversation about broader, big-picture topics while also honing in on the game, much like fans do when watching with their family and friends.”

The MegaCast will originate from a remote location. The Mannings will be joined by a host to be determined and will include other guests. While the game will always be visible, the conversation will be informal and is geared to be as if viewers are watching a game at home with friends.

“This partnership with ESPN and The Walt Disney Company reflects an ongoing, shared commitment to offering fans fun, innovative content,” Peyton Manning said in a statement. “ESPN+ has been a terrific partner for Omaha Productions as we built out The Places franchise and we’re excited to co-create a new MegaCast format that will have something for everyone.”

Peyton Manning already has a working history with ESPN. His “Peyton’s Places” series on ESPN+ was meant to be a one-off to celebrate the NFL’s 100th season, but is in its third season. The franchise has expanded to include “Places” series involving Abby Wambach (soccer), Eli Manning (college football), David Ortiz (Major League Baseball), Ronda Rousey (combat sports) and Vince Carter (NBA). Wambach’s series premiered this month.