PGA Tour in ‘arms race’ of dollars and leaning on loyalty 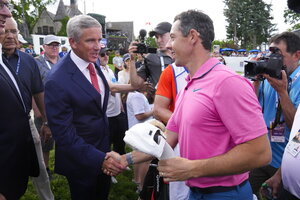 CROMWELL, Conn. (AP) — Commissioner Jay Monahan says the PGA Tour can’t win an “arms race” against Saudi-funded LIV Golf when the weapon is money. His response Wednesday was to boost prize money in eight elite events and rely on loyalty and legacy among his players.

Monahan delivered another round of stinging criticism against Greg Norman and his rival league. LIV Golf has snagged players who have combined to win nine majors in the last five years, including Dustin Johnson, Brooks Koepka and Bryson DeChambeau.

The latest to sign was Koepka, whose deal with LIV Golf was announced just as Monahan began his first press conference in three months at the Travelers Championship.

“I am not naive,” Monahan said. “If this is an arms race and if the only weapons here are dollar bills, the PGA Tour can’t compete. The PGA Tour, an American institution, can’t compete with a foreign monarchy that is spending billions of dollars in attempt to buy the game of golf.

“We welcome good, healthy competition. The LIV Saudi golf league is not that,” he said. “It’s an irrational threat, one not concerned with the return on investment or true growth of the game.”

The tour, however, appears to be trying to keep up. Monahan said an increase in prize money was in the works from its latest media rights deal it signed in 2020, noting the threat of LIV Golf accelerated some of those plans.

He announced a streamlined schedule — January to August starting in 2024 — with seven tournaments worth $20 million or more and fewer spots available for its postseason. The top 125 qualify for the FedEx Cup playoffs. Next year, only the top 70 will be eligible.

The fall would be for the players who finished outside the top 70 to secure cards for the following year, and to give them a chance to move into the top 50 — or try to stay there — to secure spots in some of the elite $20 million tournaments.

Also planned are three international events in the fall for only the top 50 in FedEx Cup points from the previous season.

Monahan cited Masters champion Scottie Scheffler, who earlier Wednesday was unusually vocal in his support of the PGA Tour. Scheffler had not won on the PGA Tour until February, and then he won four times in two months to reach No. 1 in the world.

He already has set a PGA Tour record for season earnings at nearly $12.9 million.

“If you’re good enough, you will rise to the top,” Monahan said. “And if you don’t continue to earn that top spot, someone else as hungry and as talented is right there to take your place. Again, that’s the unique beauty of what the tour has and always will offer to fans.

“It’s damn good and it’s worth fighting for.”

Koepka was among the LIV newcomers announced for the field in Oregon next week, and he was as big of a surprise as Johnson was for the inaugural London event.

Monahan was at his Koepka’s wedding on June 5 in the Turks and Caicos Islands. Koepka was part of a group of at a Rolex outing a week ago in which he joined top players — Scheffler, Jordan Spieth, Justin Thomas among them — in discussing in strong terms support for the tour.

A week later, he was signed and headed to LIV Golf.

That’s an increase of just over $50 million in prize money, or roughly what Johnson reportedly received annually as a signing fee for the LIV Golf series, and that’s before he and others compete for $25 million prize funds at each event.

That’s the arms race Monahan and the PGA Tour is facing, though it still has the top 15 players in the world ranking on its side, a core group who are speaking out more forcefully.

Still, some may have a price.

Koepka apparently did, and McIlroy cited him as another player who went back on his word. Two years ago, Koepka was second to McIlroy in denouncing the concept of a 48-man league.