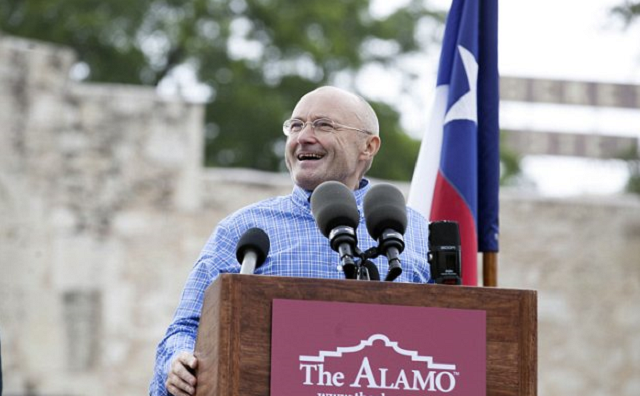 Phil Collins at the Alamo, 2014/Photo-AP

SAN ANTONIO (KTSA News) – British rock star Phil Collins remembers the Alamo very well.  The singer, drummer, songwriter and record producer has been fascinated with the Shrine of Texas Liberty since he was a 5-year-old boy watching the TV show “Davy Crockett, King of the Wind Frontier.”

In the 1980s, Collins started collecting artifacts and eventually amassed what’s believed to be the world’s largest private collection of Alamo relics. In 2014, he took the treasure trove out of the basement of his home in Switzerland and announced he was donating it to the State of Texas.  Now some of the artifacts will be unveiled at the Alamo.

The “Phil Collins Collection Preview” is going on display to the public March 2, Texas Independence Day.  The exhibit includes a brass cannon used by the Mexican Army during the Battle of the Alamo, the original battle orders from General Antonio Lopez de Santa Anna ordering the attack on the Alamo, and more artifacts from the 1836 Battle of the Alamo.

“We are beyond excited to finally share some of the amazing artifacts Mr. Collins so generously donated,” said Kristi Miller Nichols, Director of Archaeology, Collections, and Historical Research at the Alamo. “The public has been very interested in seeing the Collins Collection. It has been an honor to care for and preserve these artifacts over the years.”

You can see the  “Phil Collins Collection Preview” in the Alamo Exhibit Hall on the Alamo grounds. Admission will be free  Tuesday, March 2,  on Texas Independence Day.  The display will be available March 3 -April 25 to those who purchase an audio tour for $7.  You can book your entry into the “Phil Collins Collection Preview” at  theAlamo.org, or in-person at the Alamo Welcome Center.

This temporary exhibit will serve as a preview of what will be on display in the upcoming Alamo Exhibition Hall & Collections Building, set to open in the spring of 2022. The building will not only provide exhibit space to display the Phil Collins Collection, but will also serve as a state-of-the-art curatorial space to provide the necessary care for these priceless items. This building will serve as additional gallery space to the future Alamo Museum & Visitor Center, also in the developmental stages now.