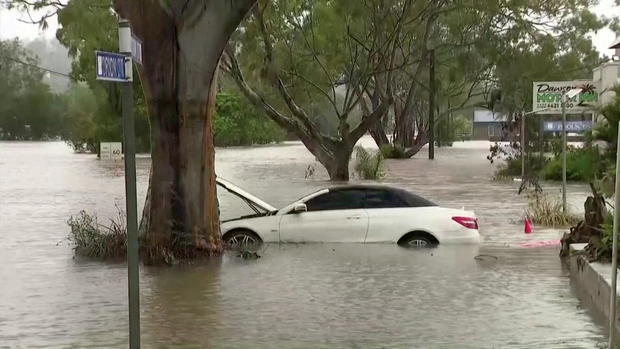 A car is seen submerged in floodwater following heavy rains in the northern town of Lismore, New South Wales, Australia, March 30, 2022 in an image taken from video. Seven Network/Handout/REUTERS
Sydney — An Australian aviation company says it has received more than 100 threats following an online conspiracy theory that its pilots unleashed a flooding disaster by cloud seeding. Conspiracy theorists spread the false claims on social media after weeks of torrential rains led to deadly east coast floods over the past two months, engulfing homes and sweeping cars from the roads.

“A pilot from Handel Aviation in Cessna 210N Centurion VH-JIL did a breakfast time cloud seeding run over Lismore South & Ballina today while sightseeing the massive flood below him,” one widely shared post reads.

The flight path of the Handel Aviation aircraft VH-JIL criss-crossing over flooded areas was also shared online by Australian fashion designer Alice McCall alongside claims it was dropping chemicals to “activate rain.”

Handel Aviation operator Mark Handel told AFP on Thursday that the company does not seed clouds.

The flight was collecting images for aerial maps provided to Australian mapping company NearMap, he said.

“Handel Aviation operates aerial photography aircraft only. Our recent flights over flooded areas of NSW and QLD are in response to the floods,” a statement on the Handel Aviation website reads.

NearMap confirmed to AFP the photos taken by Handel Aviation were commissioned to map disaster-affected areas for insurers and emergency services.

“These aerial captures are commissioned after major weather catastrophes and natural disasters, including following the recent east coast flooding,” the NearMap spokesman said.

The claims circulating online led to more than 100 threats being sent to Handel Aviation, despite it explaining the purpose of the flights on the contact page of the company’s website.

“We had really violent threatening stuff coming through. Like: ‘we have the pilots’ names, we know where you live, you’re going to pay for this,’ kind of stuff,” Handel told AFP.

Handel said he tasked his operations manager, Anthony Berko, with responding to each email and calling people who provided their phone numbers.

Some of those he contacted were surprised or angry, Berko said. But others were distressed, telling the experienced pilot they had lost everything during the floods and thought the company was responsible.

“They needed a shoulder to cry on and hear their story. They’ve basically lost everything and then someone has then said here’s your answer,” Berko said.

Despite the online claims, cloud seeding is not responsible for any of the east coast floods, said weather modification expert Simon Siems.

Siems, a professor who leads a Monash University team studying clouds and precipitation, said the practice is not conducted in the Northern Rivers region and it cannot cause flooding.

“Cloud seeding is not that effective, people do it only under very special circumstances,” he said.