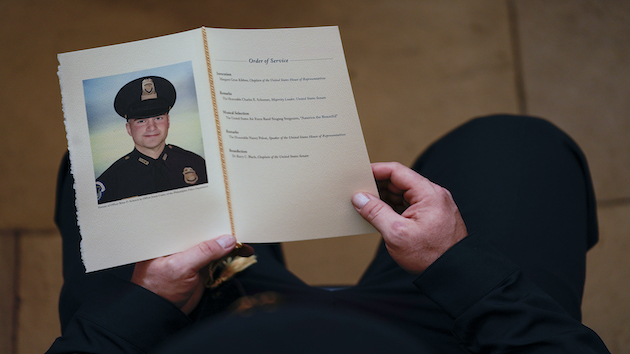 WASHINGTON, DC - FEBRUARY 3: A U.S. Capitol Police Officer holds a program for the ceremony memorializing U.S. Capitol Police Officer Brian D. Sicknick, 42, as he lies in honor in the Rotunda of the Capitol on Wednesday, February 3, 2021. Officer Sicknick was responding to the riot at the U.S. Capitol on Wednesday, January 6, 2021, when he was fatally injured while physically engaging with the mob. Members of Congress will pay tribute to the officer on Wednesday morning before his burial at Arlington National Cemetery. (Photo by Demetrius Freeman/The Washington Post/POOL)

The medical examiner’s conclusion comes amid lingering questions over whether the 42-year-old officer was fatally attacked on Jan. 6.

Last month, federal authorities arrested two men who allegedly assaulted Sicknick with bear spray at the Capitol, but authorities did not say if the assault directly contributed to his death the next day.

According to the medical examiner, a stroke is specifically what caused Sicknick’s “natural” death, and, “If death is hastened by an injury, the manner of death is not considered natural.”