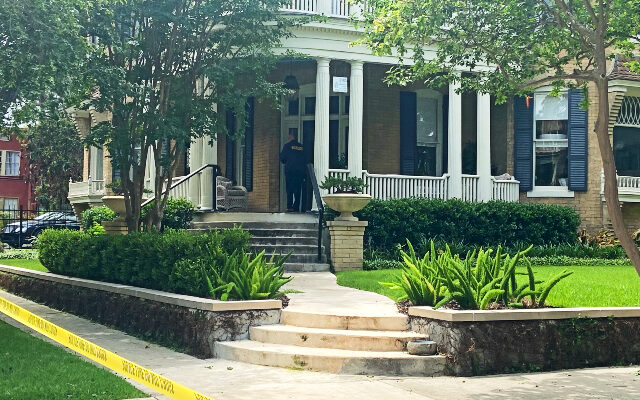 KTSA News/Katy Barber - Homicide detectives investigate the scene of a shooting in the King William area of downtown San Antonio.

SAN ANTONIO (KTSA News) — San Antonio police have captured a man they say shot another man in the back of the head in the King William area in Southtown San Antonio.

According to Police Chief Bill McManus, an altercation broke out between two day laborers working on a home around 11 a.m. Friday. During the altercation, one man shot the other in the back of the head and then ran down Madison Street where he carjacked an elderly couple at gunpoint.

Police said the man, who is between 20 and 30 years old, wrecked the stolen vehicle on the southside of town.

Police said that officers apprehended the gunman around 1:45 p.m. in the 600 block of Recio Street, but have not released his name.

The gunshot victim is a 50-year-old man and is currently in critical but stable condition, according to McManus. The homeowner was not injured and police said he performed CPR on the victim until emergency services arrived.