Possible teleworking at JBSA because of coronavirus, no decision yet on Fort Sam Houston Fiesta fireworks event 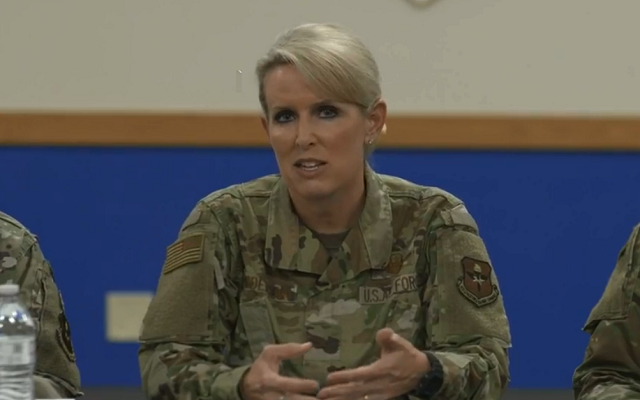 SAN ANTONIO (KTSA News) – With Joint Base San Antonio closing basic military training graduations to the public because of the coronavirus outbreak, could the Fort Sam Houston Fiesta fireworks be next?

Gen. Laura Lenderman, commander of the 502nd Air Base Wing and Joint Base San Antonio, says decisions on whether to cancel mass gatherings on military installations are being made on a case-by-case basis.

“In each case, we’re going to have to take the health risk to the force and risk to the mission into account when we consider if we’re going to allow a certain large gathering to occur,” Lenderman said at a virtual town hall Wednesday night.

Earlier this week, JBSA announced that families will not be allowed to attend basic military training graduation ceremonies to prevent the spread of the coronavirus.

“Our hearts go out to everyone here who’s impacted by this, but we also have a responsibility to our nation and to all of the community outside of our fenceline to protect this capability that we have here in San Antonio, which is our training pipeline,” Lederman said.

The traditional BMT parade also has been canceled, and the graduation ceremonies have been moved indoors. They’ll be live streamed starting with the event Friday, March 13th.

Trainees usually look forward to some rest and relaxation with their visiting families the weekend after graduation, but that’s no longer on the schedule. The airmen will graduate on Friday and head to tech school on Saturday, instead of waiting until Monday.

Joint Base San Antonio has about 80,000 employees who handle more than 200 missions. In the wake of the coronavirus pandemic, is it time to start having them work from home?

Lenderman says that decision is left to the various commanders, depending on the mission.

“It might be good to get the folks that would be eligible for teleworking, based on their mission requirements, and get their paperwork in order, so that if there comes a time when we do need to have people stay home at their commander’s discretion, we would be able to do that rather quickly,” said Lenderman.

JBSA this week also stepped up its health protection level from zero to alpha.

“Really, that’s more of what we were doing already and it’s pretty much common sense. It’s washing your hands, it’s considering sanitation, and rather than shaking hands,maybe you’re doing a fist bump or an elbow bump,” she said.