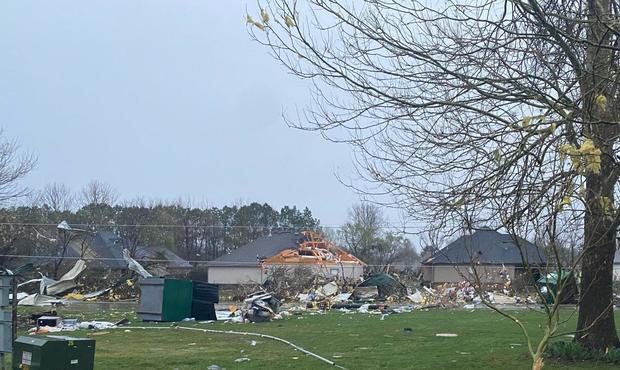 A possible tornado injured at least seven people and destroyed an elementary school building when it touched down in an Arkansas town Wednesday morning, as a strong spring storm makes its way over the region. Widespread damaging wind gusts, several intense tornadoes and severe thunderstorms are forecast for parts of the Mid-South into the central Gulf Coast through the evening, according to the National Weather Service.

Springdale Mayor Doug Sprouse said a potential tornado touched down in the town around 4 a.m. local time Wednesday. Two of the seven people injured are in critical condition, he said. All other residents are accounted for, and no deaths have been reported at this time.

The storm also tore down power lines and trees, shut off traffic lights and led to road closures, according to the Springdale Police Department. Many residents were displaced, and several business reported significant damage, Sprouse said.

Meanwhile, Springdale School District said the alleged tornado destroyed the gymnasium of George Elementary School, while leaving the building’s kitchen and cafeteria “severely damaged.” The schools closed Wednesday, and the district said maintenance staff will continue to assess the damage.

“The outpouring of love and support from our community is what makes Springdale great,” Springdale School District said in a statement Wednesday. “We are working on opportunities to help and serve our families.”

Arkansas is one of many states in the region that are in the path of severe weather, according to the National Weather Service’s Storm Prediction Center. Mississippi, Alabama, Tennessee, Louisiana, Missouri, Florida and Georgia could be in for an outbreak of severe thunderstorms, strong EF2+ tornadoes and hurricane force winds through Wednesday evening.

In Louisiana, where there are tornado warnings and watches, high wind warnings and coastal flood advisories, multiple state offices closed. As of Wednesday afternoon, more than 53,000 residents across the state were without power, according to the national database PowerOutage.us.

The National Weather Service encouraged those in the storm’s path to stay away from tall trees and power lines, store an emergency kit in a safe location, have multiple ways to receive warnings and take shelter in a well-built building if need be.