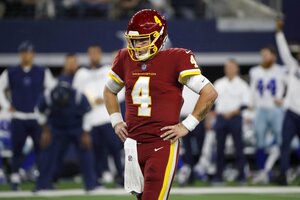 ARLINGTON, Texas (AP) — Dak Prescott and the Dallas Cowboys didn’t have to worry about the NFC East title anymore once they kicked off against Washington.

So they took care of the star quarterback’s slump instead.

Prescott threw four touchdown passes, DeMarcus Lawrence returned an interception for a score and the Dallas Cowboys celebrated their clinching of the division crown with a 56-14 rout of Washington on Sunday night.

The Cowboys (11-4) tied the franchise record for points in a first half while taking a 42-7 lead and frustrating Washington to the point that defensive tackles Jonathan Allen and Daron Payne scuffled on the sideline.

Dallas didn’t need to win to add the division title to the playoff berth that was sealed with San Francisco’s loss to Tennessee three nights earlier. Las Vegas’ 17-13 victory over Denver took care of that about an hour before kickoff, giving the Cowboys a tiebreaker over Philadelphia.

Prescott and company didn’t seem to care, and now the Eagles can’t even tie them for the division title after Dallas scored its most points, playoffs included, since a 59-14 victory over San Francisco in 1980.

Washington (6-9) allowed its most points since 2010 in the most-lopsided loss for either team in a storied rivalry played 124 times.

Prescott tied the club record for passing TDs in a half with four before halftime — one each to a running back (Ezekiel Elliott), a tight end (Dalton Schultz), a receiver (Amari Cooper) and a backup tackle (Terence Steele, who was lined up as a tight end when Prescott faked the handoff for an easy 1-yard score ).

Elliott scored twice, getting an 11-yard TD run for a 28-7 lead after opening the scoring on a 5-yard pass.

Taylor Heinicke, making a second consecutive start against Dallas after missing the game in between because of COVID-19, gave up Trevon Diggs’ NFL-leading 11th interception on the first offensive play for Washington, which was playing five days after a coronavirus-delayed loss to Philadelphia.

The Dallas offense took it from there, recording 389 yards before halftime as Prescott ended a run of mediocre showings by completing 22 of his first 25 passes and finishing with the most yards in a first half in his career with 321. He was 28 of 39 for 330 yards when he left for good in the third quarter.

“I thought he was in total control,” coach Mike McCarthy said. “His numbers in the first half reflect that. Had some shot opportunities, was patient with the checkdowns. I really like the way he played tonight.”

The Cowboys were already up 14-0 late in the first quarter when Lawrence, a defensive end, deflected Heinicke’s pass with his right hand, corralled the ball and rumbled down the left sideline 40 yards for a TD.

Lawrence was mobbed by other members of his defensive line, just as Steele was by fellow Dallas blockers on his score. It was a different scene for the guys in the trenches for Washington.

The defensive linemen were on the Washington bench when Allen and Payne appeared to exchange words before both got up and Allen, a team captain, threw a punch at his former Alabama teammate.

The Washington scuffle happened on benches the club brought in, adorned with its “W” logo, after the Cowboys did the same thing when visiting its NFC East rival two weeks ago.

The difference is, the rematch was in climate-controlled AT&T Stadium. The retractable roof was closed. Regardless, temperatures were in the 70s.

The Cowboys pulled the stunt because temperatures were in the 40s and they had been told the warmers on the benches were unreliable.

While Dallas’ three-game streak of forcing four turnovers ended with just the two first-quarter takeaways, the Cowboys recorded five sacks. Micah Parsons had his 13th, and is 1 1/2 from Jevon Kearse’s NFL rookie record for Tennessee in 1999.

Washington rookie linebacker Jamin Davis was after reporting to team doctors with possible COVID-19 symptoms before the game. The club said there wasn’t enough time to process a COVID-19 test before reporting the inactive players so Davis was held out as a precaution. … Dallas LT Tyron Smith (ankle) missed his second consecutive game and fifth overall. … Dallas DBs Malik Hooker and Jourdan Lewis went on the COVID-19 reserve list during the week.

Washington: The home finale is against Philadelphia next Sunday. It’s the fourth of five consecutive division games to finish the regular season. A loss will eliminate Washington from the playoffs.

Cowboys: The No. 1 seed in the NFC is still in play for Arizona’s visit next Sunday. Dallas and the other teams trailing Green Bay (12-3) need the Packers to lose.