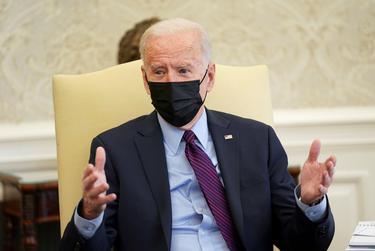 President Joe Biden did not say when or where he will visit in Texas. Credit: REUTERS/Kevin Lamarque

Biden already signed an emergency declaration for Texas on Feb. 14, which authorized the Federal Emergency Management Agency to provide the state with critical equipment, like generators, and other resources like water and diesel to alleviate the effects of the disaster. A major disaster declaration is distinct from an emergency declaration. It essentially provides a wider range of assistance through “federal assistance programs for individuals and public infrastructure.”

“I’m going to sign that declaration once it’s in front of me,” he said Friday.

An emergency declaration functions as a supplement to state and local emergency services, while a major disaster declaration is issued if the president determines a disaster “has caused damage of such severity that it is beyond the combined capabilities of state and local governments to respond,” according to FEMA’s website.

The declaration allows for various assistance programs at the discretion of the governor’s specific request and it can include programs for crisis counseling, disaster case management, disaster unemployment assistance and legal services, among others. Biden told reporters on Friday that he has already directed various federal agencies, like the Department of Defense and the Department of Health and Human Services, to continue assisting Texans through the crisis.

For infrastructure damage, the declaration offers programs that can assist with debris removal, emergency protective measures, repairing or replacing roads and bridges and assistance with repairing damages to utility infrastructure. Not all programs are activated for every disaster, however. That would depend on the governor “and the needs identified during the joint PDA and subsequent PDAs,” according to FEMA’s website.

Eight Texas Democrats penned a letter to Biden Thursday urging him to sign the major disaster declaration for the state.

“As the conditions continue, federal assistance from FEMA will be vital in ensuring that communities are able to repair damage and undertake crucial mitigation work,” the letter said.

It’s unclear when or where Biden will visit Texas. He told reporters Friday that he originally considered visiting in the middle of next week, but didn’t want to be a burden.

“When the president lands in a city in America it has a long tail,” he said.