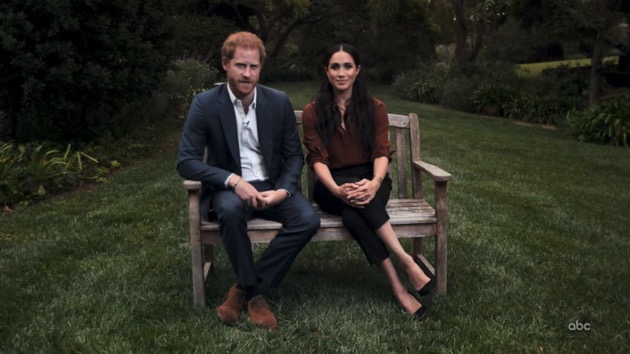 (NEW YORK) — The world got its first look over the weekend at Prince Harry’s and Meghan’s sit-down interview with Oprah Winfrey, which is being billed as a bombshell interview in which Harry and Meghan give more insights as to why they stepped down from their royal roles.

“You’ve said some pretty shocking things here,” Winfrey says to the Duke and Duchess of Sussex in a pair of clips released Sunday by CBS.

In one of the clips, Winfrey says there was “no subject that was off limits” and asks Meghan if she was “silent or silenced.”

Meghan remains silent as Winfrey interjects, “Almost survivable — sounds like there was a breaking point.”

The interview, which will air March 7 as a two-hour primetime special, is Harry’s and Meghan’s first joint interview about their decision to transition out of their working roles in the royal family. The couple, who now live near Winfrey in California, completed their last official royal engagement nearly one year ago.

Buckingham Palace confirmed last month that Harry and Meghan will not return as working members of the royal family.

In the interview with Winfrey, Harry — whose mother, Princess Diana, died in 1997 after being injured in a Paris car crash while being pursued by paparazzi — said his “biggest concern was history repeating itself.”

“For me, I’m just really relieved and happy to be sitting here, talking to you with my wife by my side,” he said.

As an image of a young Prince Harry with his late mother is shown, the prince is heard saying, “Because I can’t begin to imagine what it must have been like for her going through this process by herself all those years ago because it has been unbelievably tough for the two of us but at least we had each other.”

Princess Diana and Harry’s father, Prince Charles, separated in 1992 and divorced in 1996, one year before Diana died.

Harry shared a similar sentiment in an interview with The Late Late Show host James Corden that aired last week, saying he and Meghan left a “toxic” media environment in the U.K.

“There was a really difficult environment, as I think a lot of people saw. We all know what the British press can be like, and it was destroying my mental health,” said Harry, who has recently waged legal battles with some British tabloids. “I was like, ‘This is toxic,’ so I did what any husband and any father would do, which is like, I need to get my family out of here.”

“But we never walked away. And as far as I’m concerned, whatever decisions are made on that side, I will never walk away,” added Harry, who described his move as a royal as “stepping back rather than stepping down.” “I will always be contributing … my life is public service, so wherever I am in the world, it’s going to be the same thing.”

Harry’s and Meghan’s interview with Winfrey was announced last month, one day after Harry and Meghan revealed they are expecting their second child.

“Winfrey will speak with Meghan, The Duchess of Sussex, in a wide-ranging interview, covering everything from stepping into life as a Royal, marriage, motherhood, philanthropic work to how she is handling life under intense public pressure,” Viacom, the parent company of CBS, said in a statement announcing the special. “Later, the two are joined by Prince Harry as they speak about their move to the United States and their future hopes and dreams for their expanding family.”