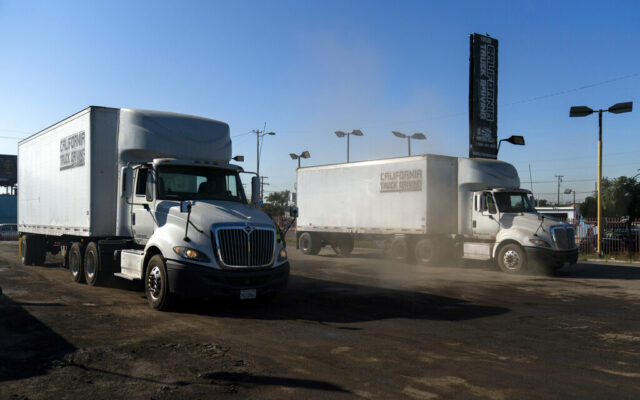 Two student drivers practice driving in reverse at California Truck Driving Academy in Inglewood, Calif., Monday, Nov. 15, 2021. Amid a shortage of commercial truck drivers across the U.S., a Southern California truck driving school sees an unprecedented increase in enrollment numbers. The increase is big enough that the school is starting an evening class to meet the demand, according to Tina Singh, owner and academy director of California Truck Driving Academy. "I think that's only going to continue because there's a lot of job opportunities. We have over 100 active jobs on our job board right now," said Singh. The companies that normally would not hire drivers straight out of school are "100 percent" willing to hire them due to shortage issues, the director added. (AP Photo/Jae C. Hong)

The lack of truck drivers in the U.S. has contributed to supply chain issues that have arisen globally during the pandemic. Now, to address the shortage, officials are considering allowing teenagers to become truckers.

A pilot program, first proposed by the Federal Motor Carrier Safety Administration (FMCSA) in 2020, would allow drivers aged 18 to 20 to operate commercial motor vehicles in interstate commerce after completing probationary hours. However, they would not be able to drive passengers, hazardous materials or special configuration vehicles.

Currently, most states allow people 18 or older to become truck drivers, but they cannot drive between states until they are 21.

The program was not implemented when it was first proposed, but the Infrastructure Investment and Jobs Act, which was signed into law by President Biden in November, requires FMCSA to establish a pilot program that would allow employers to establish an apprenticeship program for certain drivers between the ages of 18 and 21.

The program must first get approval from the Office of Management and Budget before it can open applications for truck driver positions on its website, according to deputy administrator of FMCSA Meera Joshi. While seeking approval for the three-year program, the public can comment on the proposal.

While several agencies, including American Trucking Associations — the largest national trade association for the industry — and the Commercial Vehicle Training Association, support the FMCSA proposal, it did face opposition.

Advocates for Highway and Auto Safety, Citizens for Reliable and Safe Highways, and other safety organizations noted younger drivers are more distracted and have higher rates of crashes. They also cited the Centers for Disease Control and Prevention, which says that teenagers are unable to correctly analyze dangerous situations.

No more than 3,000 apprentices will participate in the Safe Driver Apprenticeship Pilot Program at any one time and FMCSA must also meet other standards with the program and apprentices.

U.S. Transportation Secretary Pete Buttigieg told CBS News’ Errol Barnett on Friday that he has made keeping trucks on the roads, which includes recruiting new drivers, a top priority.

The Department of Transportation announced Thursday that it will fund over $32 million for states to improve the commercial driving license process. Over 100 companies committed are committing to expanding trucking apprenticeship programs and creating task forces to investigate predatory truck leasing.

About 72% of goods transported in the U.S. are carried by truckers, and the U.S. needs another 80,000 truckers.

In December, the Biden administration also announced a plan to help strengthen the trucking industry and hire more drivers.

The administration says “outdated infrastructure, the COVID-19 pandemic, and a historic volume of goods moving through our economy have strained capacity across the supply chain, including in trucking,” and that the “pandemic exacerbated longstanding workforce challenges in the trucking industry.”

Part of the plan includes “identifying effective and safe strategies to get new entrants in the field from underrepresented communities, including women and young drivers between the ages of 18-20.”

Some state legislators are also working to recruit more drivers during the supply chain crisis and school bus driver shortage. In New York, Governor Kathy Hochul announced this week a new plan to allow qualified third parties to offer the road test for commercial driver’s licenses as a way to address the driver shortage, according to CBS New York. This would create more testing locations and expand capacity at existing state-run sites, thus reducing the time it takes to get more qualified drivers licensed.