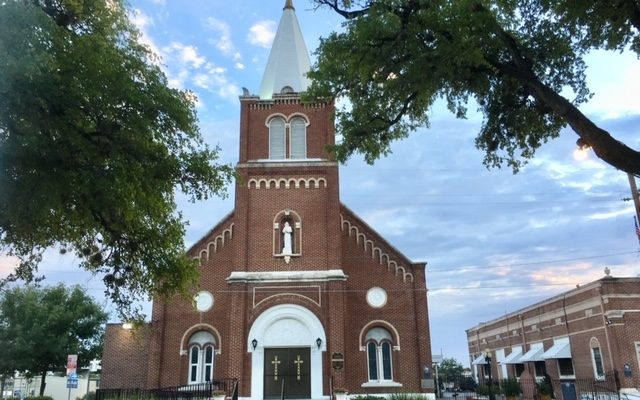 SAN ANTONIO (KTSA News) – Columbus Park in downtown San Antonio is one step closer to getting a name change.  A proposal to rename it Piazza Italia got a thumbs up Thursday from a special committee and the plan is sailing toward City Council for final approval.

Columbus Park is in the northwestern edge of downtown on West Martin Street near IH 35.  It’s an area behind The Children’s Hospital of San Antonio-CHRISTUS Health where Italian immigrants settled in the late 1800s and early 90s.

Councilman Roberto Trevino introduced the plan that was devised with input from the Christopher Columbus Italian Society of San Antonio, which wants to protect the property.  He said changing the name of Columbus Park to Piazza Italia honors the history of the area where so many Italian immigrants settled, raised their families, built San Francesco Di Paola Catholic Church and opened businesses. Trevino told the committee that in the 1950s, the highways, IH 35 and IH 10 were constructed there, forcing many families to move.

“But what is still there is an amazing Italian spirit and Italian culture,” he said.

That was echoed by many area residents of Italian descent who told stories about parents and grandparents who lived in the area.

Tony Magaro submitted a written comment supporting the name change and calling it “a good solution that recognizes the contributions of the Italian American community in our city.  While our neighborhood is gone, our hearts are still part of the fabric of life in San Antonio.”

Another man who favors changing the name to Piazza Italia recalled how the area was known as  “Little Italy.”  He noted that the nearby church and hall have hosted numerous  spaghetti dinners for decades to help raise funds for various organizations, including the 100 Club of San Antonio, which supports families of law enforcement officers and firefighters who have lost their lives in the line of duty.

A woman urged the committee to keep the Columbus Park name. She warned city leaders that they’re going down a slippery slope with the removal of statues and renaming of parks and streets that area offensive to some people.

“Where and when will it end?” she asked.

Another woman proposed that the park be named after a hero of the Alamo.

“I do appreciate being allowed input into the subject since so many of the statues in this country are being pulled down without any vote or input from the citizens of this country,” she said.

Elizabeth Cicero left her comments for the committee on voice mail, urging them not to change the name of Columbus Park.

Some people suggested other names, including Alamo Park, River City Park, South Texas Park, Unity Park and Yanaguana, which means “fresh waters”  in the language of the Payaya Indians.

Thirty-six of the people who submitted comments were in favor of renaming the park, and 22 were opposed.  The committee voted in favor of sending the proposal to City Council for final approval.

The Columbus statue that overlooked the park has been removed for cleaning after being splashed with red paint last month.  City council next month will vote on a proposal to permanently keep it out of the park and return it to the Society.