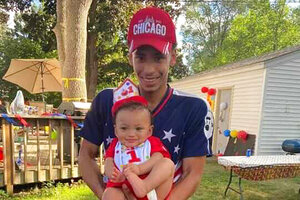 MINNEAPOLIS (AP) — Prosecutors on Thursday rested their case against Kim Potter, the suburban Minneapolis police officer charged in the shooting death of Black motorist Daunte Wright, setting the stage for a defense that will have Potter directly addressing the jury.

Potter, 49, has said she meant to use her Taser instead of her gun when she shot and killed Wright on April 11 as he had pulled away from officers during a traffic stop and was trying to drive away. Body-camera video captured her shouting “I’ll tase you!” and “Taser, Taser, Taser!” before she fired once.

Her attorneys have also argued that Potter would have been within her rights to use deadly force even if she had intended to do so because a fellow officer was endangered by Wright’s attempt to flee.

Prosecutors called police witnesses to build their argument that Potter, who retired from the Brooklyn Center police force two days after the shooting, was an experienced officer who had been thoroughly trained in use of a Taser, including warnings about the danger of confusing it with a handgun. They have to prove recklessness or culpable negligence if they are to win a conviction on the manslaughter charges.

The death of Wright, who was Black, set off angry demonstrations for several days in Brooklyn Center. It happened as a white former officer, Derek Chauvin, was standing trial in nearby Minneapolis for the killing of George Floyd. Potter, who is white, is charged with manslaughter.

It wasn’t clear when Potter would take the stand. Her attorneys also planned to call several character witnesses to testify on her behalf, though the judge ruled Wednesday that they would be limited to three.

“The use of deadly force was not appropriate and the evidence suggests a reasonable officer in Officer Potter’s position could not have believed it was proportional to the threat at the time,” said Stoughton, a professor at the University of South Carolina School of Law who also testified for the prosecution at Chauvin’s trial.

Stoughton reminded jurors that Potter warned that she was about to use her Taser on Wright, and said a reasonable officer would not have decided to use a Taser if they thought there was an imminent threat of death or great bodily harm.

Stoughton said deadly force would have been inappropriate even if Potter believed another officer was in the car because of the risk that nearby officers or Wright’s passenger could be shot.

And he said that if it appeared Wright was going to drive away, shooting would make things worse because he could be incapacitated and the vehicle itself would become a weapon.

In an acrimonious cross-examination, defense attorney Earl Gray sought to undermine Stoughton’s expertise, including by questioning his experience as a police officer. Gray got Stoughton to agree that Wright would not have been shot if he hadn’t tried to get away, and he fired a series of questions at Stoughton to point out that Wright did not stop resisting the officers despite Potter’s warnings that she intended to use her Taser.

The case is being heard by a mostly white jury.