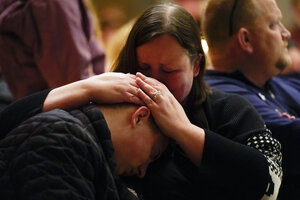 OXFORD TOWNSHIP, Mich. (AP) — The parents of a teenager accused of killing four students at a Michigan school were summoned to discuss his behavior just a few hours before the violence, a sheriff said.

The disclosure was made Wednesday as Ethan Crumbley, 15, was charged as an adult with two dozen crimes, including murder, attempted murder and terrorism for a shooting Tuesday at Oxford High School in Oakland County.

“He deliberately brought the handgun that day with the intent to murder as many students as he could,” assistant prosecutor Marc Keast said while successfully arguing for no bail for Crumbley and a transfer to jail from a juvenile facility.

No motive was offered. But prosecutor Karen McDonald said the shooting was premeditated, based on a “mountain of digital evidence” against Crumbley.

Investigators found that he had recorded a video the night before the bloodshed in which he discussed killing students, Lt. Tim Willis of the sheriff’s office said.

“This was not just an impulsive act,” McDonald told reporters.

During his arraignment, Crumbley replied, “Yes, I do,” when asked if he understood the charges. Defense attorney Scott Kozak entered a plea of not guilty.

Oxford High, which is located roughly 30 miles north of Detroit, was closed for the rest of the week along with the district’s other schools. Some districts nearby and across suburban Detroit canceled classes Thursday due to concerns over threatening messages circulating on social media following the shooting. Some schools stayed open with stepped-up police presence as a precaution.

Sheriff Mike Bouchard told reporters that Crumbley’s parents were called to the school Tuesday “for behavior in the classroom that was concerning.” The teen remained in school, however, and the shooting occurred a few hours later.

Bouchard didn’t say what had worried school officials. He said investigators believe the gun was already in the 1,700-student school.

“There is nothing that he could have faced that would warrant senseless, absolutely brutal violence on other kids,” the sheriff said, noting that Crumbley had an additional 18 rounds of ammunition when he was arrested.

In court, Keast said Crumbley entered a bathroom with a backpack and came out with a semi-automatic handgun, firing at students while moving down the hallway. The four students who were killed were 16-year-old Tate Myre, 14-year-old Hana St. Juliana and Madisyn Baldwin and Justin Shilling, both 17.

Three students were in hospitals Wednesday night, including a 17-year-old girl in critical condition, the sheriff’s office said. Others who were injured were discharged.

Deputies rushed to the school around lunchtime Tuesday and captured Crumbley within minutes of the shooting. His father bought the 9 mm Sig Sauer gun last week, according to the sheriff.

This was the deadliest school shooting since the Santa Fe, Texas, High School shooting in 2018, according to The Associated Press/USA TODAY/Northeastern University Mass Killings database. It tracks all U.S. homicides since 2006 involving four or more people killed, not including the offender, over 24 hours regardless of weapon, location, victim-offender relationship or motive. The U.S. has had 31 mass killings this year of which 28 involved firearms.

McDonald said charges were being considered against Crumbley’s parents.

“Owning a gun means securing it properly and locking it and keeping the ammunition separate,” she said.

The shooting should be a wake-up call for new gun laws in a country that has become “desensitized to school shootings,” McDonald told reporters.

“We have to do better,” the prosecutor said without offering specific changes. “How many times does this have to happen? How many times?”

She also said the terrorism charge is appropriate in this case.

“What about all the children who ran, screaming, hiding under desks? … Those are victims, too, and so are their families and so is the community,” McDonald said.

Video posted on social media showed students rushing to get out of first-floor classroom windows rather than open a door to someone who claimed to be a police officer. Bouchard said he likely was a detective.

After the 2016 presidential election, Crumbley’s mother wrote an open letter to Donald Trump as a blog post. It suggested school trouble, financial struggles, resentments — but also hope for the future.

Jennifer Crumbley said she was skipping car insurance payments to hire a tutor to help her son, who was 10 at the time. She blamed the “common core” curriculum used by teachers.

“My son struggles daily, and my teachers tell me they hate teaching it but they have to,” Jennifer Crumbley wrote.

She also celebrated her right to own a gun, referring to her job as a real estate agent.

“As a female and a Realtor, thank you for allowing my right to bear arms. Allowing me to be protected if I show a home to someone with bad intentions,” she wrote. “Thank you for respecting that Amendment.”