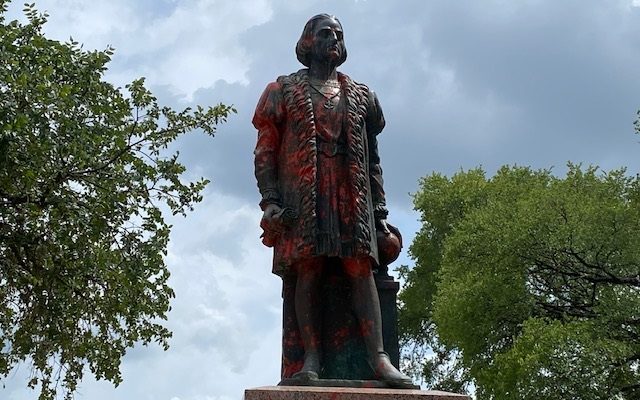 SAN ANTONIO (KTSA News) – The organizer of a protest at the Christopher Columbus statue downtown says the demonstration Saturday is still on, despite a new ban on gatherings of more than 10 people in city parks and plazas.  The restriction aimed at helping to prevent the spread of COVID-19  is scheduled to go into effect at daybreak Saturday, just hours before the protest at noon.

He has led other protests at the statue, which Diaz says represents systemic racism and oppression. He says Christopher Columbus was a murderer of Indigenous people and a slave trader.

In the wee hours of the morning Thursday, someone splattered red paint on the sculpture that overlooks Columbus Park in the Northwestern section of downtown San Antonio on West Martin near IH 35.  Diaz says he has no idea who’s behind the vandalism, but it could have been averted.  He says Mayor Ron Nirenberg could have put a plan to protect the statue on the fast track at City Hall.

The Christopher Columbus Italian Society of San Antonio has been working with City Councilman Roberto Trevino on a proposal to remove the  statue, return it to the Society and rename the park Piazza Italia.  Trevino filed a Council Consideration Request June 17, in hopes of getting the plan to a committee quickly, but that won’t happen until Tuesday, June 30.

With the protest scheduled this weekend, Trevino on Thursday asked that the city remove the statue pending city council approval of the plan.

“The mayor could have already removed the statue and it wouldn’t have been tagged,” said Diaz “He can still remove it and that would make our protest unnecessary.”

“Beginning at daybreak tomorrow, Saturday, gatherings of more than 10 will be prohibited in any city park or plaza,” the order states.

When asked at the COVID-19 briefing Friday evening if the restrictions apply to protests, Nirenberg said,”It’s all city parks and plazas, and we’re doing this to protect human health.  This is to keep people alive in our community.”

How will the restrictions be enforced?

“We are going to kindly ask people to think about the pandemic that we’re in and disperse.  This is about making sure that we don’t overwhelm our hospitals.  We’re going to ask you to please not do that right now.”