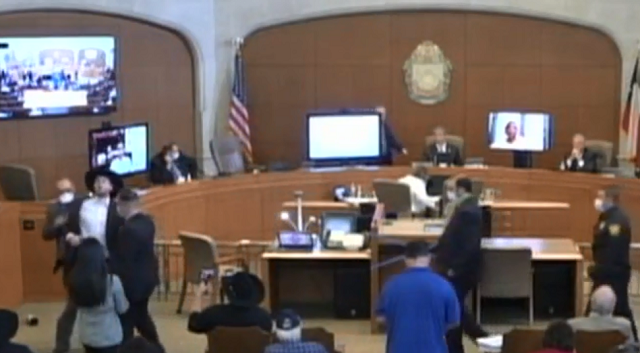 Owen Shroyer is escorted out of City Council meeting, May 14, 2020/Screenshot from City of San Antonio Video.

One by one, members of Texas Freedom Force and others  took their turn blasting city council for approving the resolution which noted that using terms like “Chinese virus” and “Kung Fu” virus to describe COVID-19 has led to acts of racism and discrimination against the Asian community.

“The worst case of liberal political correctness, however, is to tell its citizens that the words Chinese or Wuhan virus is racist or hate speech,” said Lamar Henry.  “If a few get their drawers in a wad over that, well you know what? I don’t care.”

“The government is not our mother.  Our duty as citizens is to stand up to a tyrannical government and unjust laws,” said Jennifer Paz.

Angie Aguirre scolded Mayor Ron Nirenberg for comments made during a recent COVID-19 briefing about protesters at the Alamo.

“From most of what I’ve seen, those guys are pretty used to wearing face coverings and masks. They would be picking a hell of a time to take them off,” the mayor said last month when told that many in the crowd were not wearing masks.

“Mayor, I take offense on you announcing publicly, implying those guys are used to wearing masks and they chose a helluva time to take them off,” said Aguirre.

She suggested  he must have been referring to Antifa, the anti-fascist group, which Aguirre said are “always hiding behind their masks at rallies and protests.”

City Attorney Andy Segovia reminded the speakers that they  should focus their comments on the agenda item they signed up to address.

“Merely mentioning an ordinance and not speaking at all about it does not comply with that requirement,” said Segovia, as one of the protesters shouted from his seat.

Suddenly, one of the protesters, Owen Shroyer walked to the front and shouted,”This council is a joke.” The mayor told him it was not his turn to speak, but Shroyer kept shouting, and then turned to face the council and booed before he was escorted out.