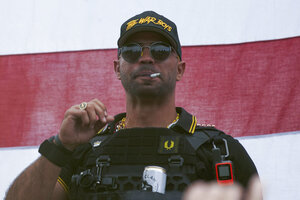 The leader of the Proud Boys, who was arrested in Washington shortly before the Capitol riot, previously worked undercover and cooperated with investigators after he was accused of fraud in 2012, court documents show.

Henry “Enrique” Tarrio helped law enforcement in a variety of investigations nearly a decade ago by providing information and going undercover, the records show.

The Proud Boys is a far-right, male chauvinist extremist group that seized on the Trump administration’s policies and was a major agitator during earlier protests and the Capitol riot on Jan. 6. The Proud Boys have railed against a “deep state” and work to break down the current government system, and so the revelations of Tarrio as a federal informant came as quite a surprise.

The details of Tarrio’s cooperation, which was first reported Wednesday by Reuters, were found in a transcript of a 2014 hearing in federal court in Florida regarding his sentence for participating in a scheme involving the resale of diabetic test strips.

The prosecutor and Tarrio’s defense attorney both cited Tarrio’s extensive cooperation in arguing that his sentence of 30 months should be cut. The judge agreed to reduce his sentence to 16 months, the records show.

“Your Honor, frankly, in all the years, which is now more than 30 that I’ve been doing this, I’ve never had a client as prolific in terms of cooperating in any respect,” said Tarrio’s lawyer at the time, Jeffrey Feiler, according to the transcript.

An email seeking comment was not immediately returned from a lawyer representing Tarrio in his current case. In an interview with Reuters, Tarrio denied ever cooperating with authorities.

After Tarrio’s 2012 indictment, he helped the government prosecute more than a dozen other people, the federal prosecutor told the judge, according to the transcript. Tarrio’s lawyer said he was the first defendant to cooperate in the case and was also involved in a variety of police undercover operations involving things like anabolic steroids and prescription narcotics.

“From day one, he was the one who wanted to talk to law enforcement, wanted to clear his name, wanted to straighten this out so that he could move on with his life. And he has in fact cooperated in a significant way,” the prosecutor said, according to the transcript.

Tarrio was arrested in Washington on Jan. 4, two days before the pro-Trump mob stormed the Capitol in a bid to overturn President Joe Biden’s victory.

He was accused of vandalizing a Black Lives Matter banner at a historic Black church during an earlier protest in the nation’s capital. The banner was ripped from Asbury United Methodist Church property, torn and set aflame in December.

Tarrio was seen with the sign in video of the incident posted on YouTube, according to a police report. When police pulled Tarrio over, officers found two unloaded magazines emblazoned with the Proud Boys logo in his bag that had a capacity of 30 rounds each, authorities said.