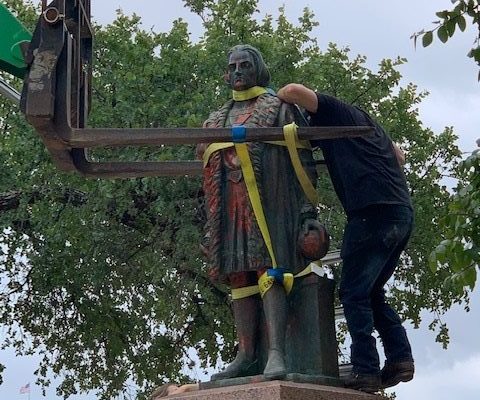 SAN ANTONIO (KTSA News) – The City of San Antonio  Parks and Recreation Department has scheduled a public tele-hearing Thursday afternoon on a proposal to change the name of Columbus Park to Piazza Italia.

After meeting with the Christopher Columbus Italian Society of San Antonio, District 1 Councilman Roberto C. Treviño submitted a City Council Consideration Request to remove the Columbus statue from the downtown park near West Martin at IH 35 and return it to the Society.  The city removed the statue for cleaning  last month after vandals splashed red paint on it, and the full city council is scheduled to vote next month  on its permanent removal.

The second part of the proposal was the renaming of  Columbus Park to Piazza Italia, commemorating the culture and heritage of the Italian community in San Antonio, which flourished in the northwestern edge of downtown in the late 1800s and early 1900s.

“The Society supports this action in the spirit of being a part of the movement to unite the San Antonio community and reflect inclusivity in the public green space at the park. With the renaming of the park, the City will continue to honor the significant contributions Italian immigrants made to our community in the heart of their former neighborhood,” stated the request submitted by Trevino.

The deadline to submit written comments to the Committee liaison: [email protected].   is 4 pm Wednesday.  Comments will be read at the time the item is heard.

You can also leave a voice mail message of two minutes by dialing 210-207-4207 by Wednesday at 4 pm .  That’s also the deadline  to leave your name and telephone number to make a comment during the meeting.

You can also joint the meeting online.