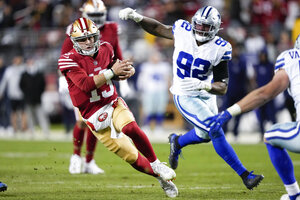 SANTA CLARA, Calif. (AP) — Brock Purdy’s NFL career started with the moniker of “Mr. Irrelevant” and the weeklong trip to Newport Beach to celebrate the player picked last in the draft.

With one more win, Purdy’s rookie season in the NFL will end on the brightest stage of all as a starting quarterback in the Super Bowl for the San Francisco 49ers.

It’s been an improbable nine-month journey from the trip to Disneyland, golf tournament, and a roast where he received the Lowsman Trophy as the last draft pick to the NFC title game on Sunday when the 49ers (15-4) visit the Philadelphia Eagles (15-3).

“Going to the NFC championship, it means a lot to us and for myself,” Purdy said. “When I take a step back, it’s pretty cool. Very thankful.”

Purdy is set for perhaps his toughest test yet on Sunday, when he faces an Eagles defense that led the NFL with 70 sacks and must deal with an imposing road environment.

Purdy handled the crowd noise well in his first road start at Seattle last month, with coach Kyle Shanahan telling him at the time it was important to deal with that before the postseason.

“He did say it was good preparation for what we might have to play in terms of the playoffs, going on the road for road games and obviously Philadelphia,” Purdy said. “In these kind of games, it’s all about communication. How can you operate smoothly, get in and out of the huddle, get the play off the right way, make sure everyone is on the same page. So that’s definitely a big emphasis this week.”

Purdy has aced every test he’s faced so far and has already become perhaps one of the most productive “Mr. Irrelevant” since the title was first handed out in 1976.

He is the third rookie quarterback ever to win two playoff starts, the fifth to reach the conference title game as a starter and will look to be the first to reach the Super Bowl.

Pretty impressive for the ninth QB taken in the draft. But not a complete surprise to the supremely confident Purdy or the Niners, who saw flashes during Purdy’s limited work in training camp.

San Francisco cut Nate Sudfeld in order to keep Purdy as the third QB and the team didn’t lose any confidence when he was forced to take over early in Week 13 after Jimmy Garoppolo got hurt.

Purdy helped the Niners win that game against Miami and has won all seven starts since then, posting an NFL-best 111.4 passer rating in that span with 16 TDs and only three interceptions.

A San Francisco offense filled with playmakers such as Christian McCaffrey, Deebo Samuel, George Kittle and Brandon Aiyuk has gotten better instead of regressing with a rookie running the show.

The history of rookie QBs making it this far in the postseason is not very successful with Shaun King (1999), Ben Roethlisberger (2004), Joe Flacoo (2008) and Mark Sanchez (2009) all losing in that round.

The four combined for a 51.8 passer rating in the title games with nine interceptions, four TD passes and just 196.8 yards passing per game.

But Purdy has already exceeded the performances of almost all rookie QBs in the postseason. He became the first rookie to account for four TDs in a playoff game in a wild-card win over Seattle when his 332 yards passing were the most for a rookie in his first playoff start since Sammy Baugh threw for 335 in the NFL title game in 1937 to lead Washington past Chicago.

Purdy wasn’t nearly as productive last week against Dallas’ tougher defense, throwing for 214 yards with no TDs. But he once again protected the ball with no turnovers, giving him consecutive playoff games with at least 200 yards and no turnovers. No other rookie has done that even once.

“He’s been unbelievable with that,” Shanahan said. “I think that’s the number one thing he’s done and to be able to be as good with the ball as he has while still making a number of the plays that he has that’s definitely the thing I’ve been most impressed with.”

Purdy has pulled off many impressive feats since taking over with his ability to extend plays adding a new element to a dynamic San Francisco offense.

That has helped the Niners score an NFL-best 32.6 points per game since he stepped in after the first drive against the Dolphins.

“I’m not shocked anymore,” McCaffrey said. “It’s just who he is now.”