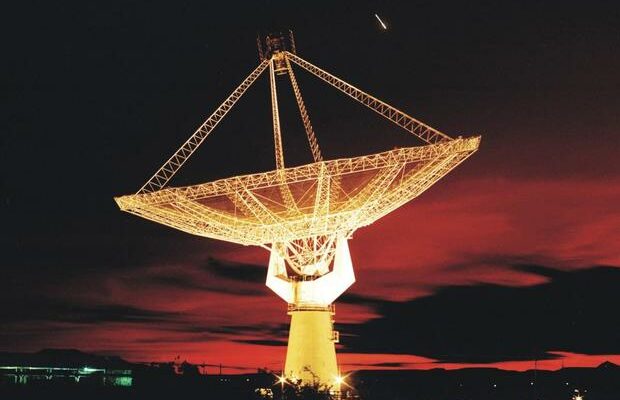 One of the dishes of the Giant Metrewave Radio Telescope (GMRT) near Pune, Maharashtra, India.  National Centre for Radio Astrophysics

Researchers say they have captured a radio signal from the most distant galaxy to date. The signal, which had a specific wavelength called the 21 cm line, is helping answer questions about the early universe, according to a news release from McGill University, published last week.

The radio signal, captured by the Giant Metrewave Radio Telescope in India, was in the galaxy known as SDSSJ0826+5630.

Researchers at McGill University and the Indian Institute of Science studied the signal and found it was emitted when the universe was 4.9 billion years old. “It’s the equivalent to a look-back in time of 8.8 billion years,” said researcher Arnab Chakraborty, a post-doctoral researcher at McGill.

The telescope was able to pick up the distant signal because it was bent by another galaxy located between the signal and the telescope, researchers said. “This effectively results in the magnification of the signal by a factor of 30, allowing the telescope to pick it up,” said Nirupam Roy, co-author of the study and an associate professor at the Indian Institute of Science.

This signal bending is called gravitational lensing, and it could help researchers observe faraway galaxies and the cosmic evolution of stars.

“A galaxy emits different kinds of radio signals. Until now, it’s only been possible to capture this particular signal from a galaxy nearby, limiting our knowledge to those galaxies closer to Earth,” Chakraborty said.  “But thanks to the help of a naturally occurring phenomenon called gravitational lensing, we can capture a faint signal from a record-breaking distance. This will help us understand the composition of galaxies at much greater distances from Earth.”

The researchers were able to determine that the atomic mass of the hydrogen gas in SDSSJ0826+5630 is nearly twice the mass of the stars visible to us. Hydrogen gas “provides the basic fuel for star formation in a galaxy,” the researchers write in the study. “Understanding the evolution of galaxies over cosmic time requires knowledge of the cosmic evolution of this neutral gas.”

The research shows scientists may be able to probe the cosmic evolution of neutral gas with low-frequency radio telescopes in the near future.