Rainy week ahead in San Antonio thanks to Tropical Storm Nicholas 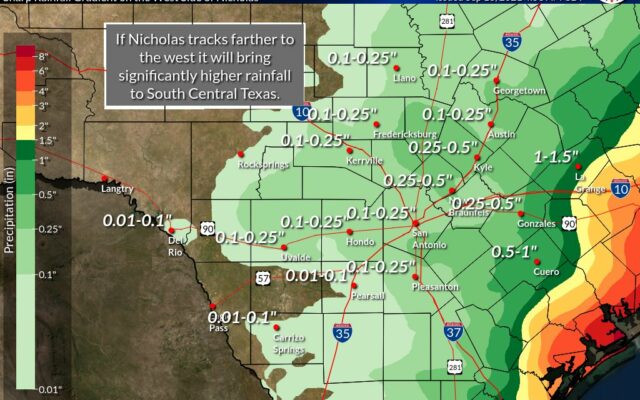 SAN ANTONIO (KTSA News) — Storm and rain chances are in the forecast through the weekend as Tropical Storm Nicholas gets ready to hit the middle Texas coast sometime today.

Bexar County should not see the 40 to 50 mph storm-force winds that are set to slam into DeWitt, Fayette and Lavaca counties, but there could be some localized heavy rainfall starting later today.

Satellite view of Tropical Storm Nicholas early this morning. Much of the colder cloud tops and rain are currently located north and east of the low level center. pic.twitter.com/LwbRKHjkg9

The National Weather Service said the Monday forecast has the highest storm chances up to 60% and then will maintain 20 to 30% precipitation chances through Sunday.

If the storm shifts father to the west, the NWS said South Central Texas, including Bexar and surrounding counties, could see “significantly higher rainfall.”

Temperatures are expected sit in the mid-80s today and tomorrow and peak at the mid-’90s for daytime temperatures during the weekend. Lows will hover around the mid-’70s in the evening.

9:55a: The rain continues to push over the far southeast part of South Central Texas associated with a rain band from TS Nicholas. Activity should persist late this morning into the afternoon. CDT #txwx pic.twitter.com/OvK8S9DT4r