Rapid school reopenings may have led to thousands of COVID cases, hundreds of deaths in Texas 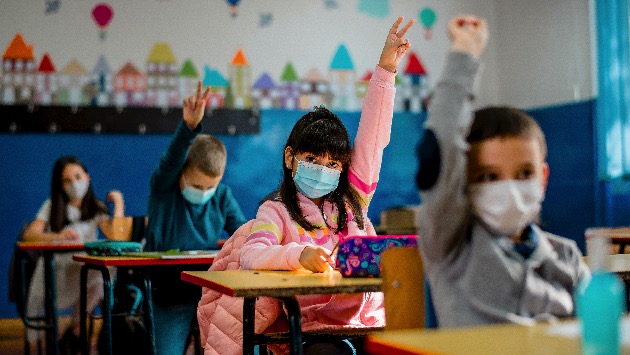 (LEXINGTON, Ky.) — A plan to rapidly reopen schools in Texas may have contributed to thousands of COVID-19 cases and hundreds of deaths, according to an analysis by economists and public policy experts from the University of Kentucky.

The analysis, which has not yet been peer reviewed, used a statistical model to estimate that roughly 43,000 people contracted COVID-19 and 800 people possibly died in Texas two months after schools reopened statewide, when virus transmission already was high.

The research highlights how in-person learning and its potential “spillover” can affect nearby communities.

Though it isn’t clear how many of those reported infections and deaths were teachers or where the deaths occurred, the data shows “robust evidence that reopening Texas schools gradually but substantially accelerated the community spread of COVID-19.”

The Centers for Disease Control and Prevention said it was safe to reopen schools if proper virus mitigation strategies, such as mask-wearing and social distancing, were observed, noting that in-person learning is safest in communities where transmission already is low.

While some schools opted for phased, staggered and hybrid returns to in-person learning, the May study, titled School Reopening, Mobility and COVID-19 Spread: Evidence from Texas, found all of the school districts in Texas reopened for in-person learning at different points during the 2020 fall semester at near-full capacity.

“Our best estimate is that over 90% of school districts opened fully in-person without any staggered or phased-in attendance. This is in contrast to 42% nationally,” the study said. “At the time, COVID-19 rates in the community were relatively high.”

Dr. Charles Courtemanche, an associate professor at the University of Kentucky’s Gatton College of Business and Economics and one of the study’s authors, said research showed that reopening schools in Texas seemed to have signaled to the greater community that life was returning to normal.

While schools can reopen safely, the study found increased social activity among adults when kids went back to in-person learning that could have contributed to community spread.

“If you think about the overall effect of reopening schools and COVID-19 spread in a community, what’s happening within the walls of the school is actually just a really small piece of the puzzle,” Courtemanche said. “Are the parents going back to in-person [jobs]? Are the parents just going out to lunch more now? Are they resuming other sorts of leisure activities that carry various degrees of risk?”

“It’s really quite remarkable how you see that the effects start to emerge at the exact time schools were reopened,” he added. It wasn’t “three weeks before, four weeks before, two months before, they start to pop out that week. That’s pretty strongly consistent with there being a causal effect.”

The study also pulled information from SafeGraph, which tracks the movement of people 16 and older by using cell phone data, which showed that time spent outside the home by adults surged in communities where higher numbers of children returned to in-person schooling.

“We find convincing evidence that opening schools led to community spread, and was likely facilitated by increased mobility, which could arise both directly in schools but also indirectly through the behaviors of parents or other adults,” the study said.

ABC News Contributor John Brownstein, an epidemiologist and professor at Harvard Medical School, said schools can be a factor in what contributed to the spread of virus cases, but “I would just be very careful to assign such a direct causality.”

“By having more kids in school,” he said, “it means there’s greater mobility … but it’s not necessarily the kids themselves. It’s the activities that surround moving kids around.”

He noted that it’s hard to isolate the impact of reopening schools in Texas with the virus already running rampant and without knowing which schools used proper mitigation strategies.

“I think we saw definitely some evidence for schools that didn’t have measures in place, that they are more prone to having cases and potentially connected to community transmission,” Brownstein said. “But the schools that really had protocols like social distancing, mask-wearing, potentially testing, have been able to keep their patient populations healthy.”

The study comes as Texas Gov. Greg Abbott announced on Tuesday that he was ending the state’s mask mandate for public schools starting June 5. A statewide mandate ended in early March.

About 40% of Texans have been fully vaccinated, according to state data, but the vast majority of children have not.

Those numbers likely will change come the new school year as the Pfizer vaccine was authorized last week for children ages 12 to 15.

Courtemanche said school districts should be “smart” and “weigh the pros and cons” with reopening this fall.

“What’s your rate of community spread? And if you’re somewhere where the vast majority of the adult population has been vaccinated, and then even adolescents, [if] your rates of community spread are very low, I’d be perfectly comfortable opening schools and operating very close to normal,” he said.

He also urged everyone who’s eligible to get a vaccine to help lower community rates of infection.

The study was conducted by the National Bureau of Economic Research, a non-profit think tank that conducts economic research.

The Texas Education Agency defended the move to reopen schools in light of the study.

“This decision-making was guided by science and influenced by expert medical advisors. It is corroborated by the public-facing COVID-19 school case dashboard. Of the approximately 3.8 million students, teachers, and staff learning and working on Texas public school campuses this school year, just more than 5% reported a test-confirmed case of COVID-19. In no way can that be characterized as a ‘substantial increase’ of COVID-19 cases in the state,” TEA told ABC Dallas affiliate WFAA.