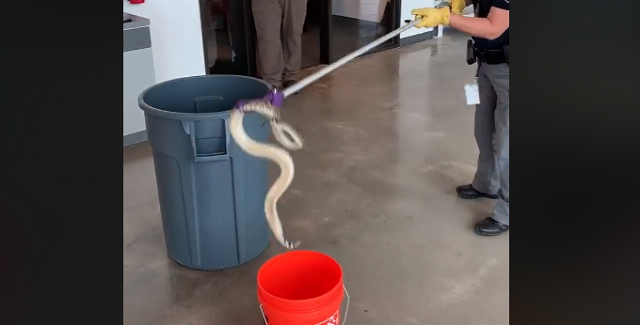 SAN ANTONIO (KTSA News) – Officers in Manor, Texas knew they had to call for backup when they responded to a call for help from a business on Highway 290, and the trespassers threw a hissy fit.

A 3-and-a-half-foot diamondback rattlesnake and her 16 babies were found last week at Sunstate Equipment.

“These snakes should never be handled,” Manor police said in a Facebook post. “You should call animal control to get them removed safety.”

Texas Parks and Wildlife says rattlesnakes can grow up to six feet long. They lie on rocks, wood piles and other spots.

“Snakes avoid your huge body, but will definitely bite if stepped on or feel trapped,” warned Texas Parks and Wildlife.

Texas Parks and Wildlife advises you to wear boots in tall grass.  If you’re bitten by a venomous snake, get to a hospital immediately.

Here’s a video from the Manor Police Department’s Facebook Page.