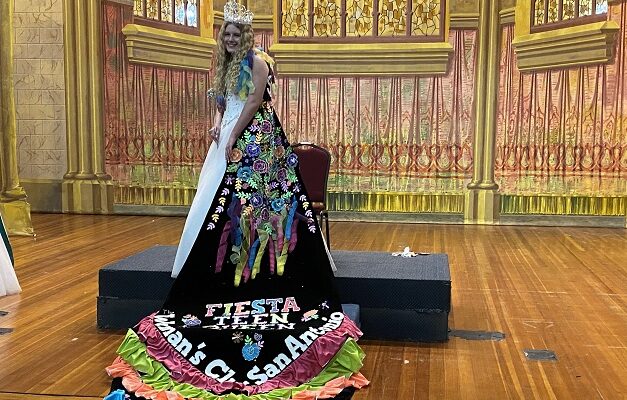 SAN ANTONIO (KTSA News) – In a prelude to Fiesta San Antonio, the Woman’s Club of San Antonio has crowned the Fiesta Teen Queen.

Eighteen-year-old Sophia Christiansen, a senior at Ronald Reagan High School, was escorted by her brother, Harold, at a ceremony Sunday at the Scottish Rite Cathedral downtown.  Her younger sister, Tessa, also was a member of the royal court.

“This is incredible,” said Christiansen after the coronation. “I’ve been doing so much with the Woman’s Club and I’ve been participating in this event for several years.  To be the queen is amazing.”

She’ll represent the Woman’s Club at dozens of Fiesta events in June, and then she’ll start preparing for her move to College Station.  Christiansen has been accepted into the Texas A&M Honors program where she plans to major in biomedical science.

“My parents went to A&M.  I grew up going to Aggie football games, and now, to be a part of the student body is so exciting,” she said.

“It’s nice to be needed again,” Bakke said with a laugh. “They had us on mothballs for a year.”

Fiesta San Antonio, which is traditionally held in April,  was canceled in 2020 because of the pandemic .  This  year’s 11-day event was postponed until June.   The Battle of Flowers Parade and the Fiesta Flambeau Parade were canceled for the second year in a row, but Bakke says the Texas Cavaliers are rolling along with plans for the Fiesta River Parade, the only major Fiesta parade to take place this year.

“It’s probably the only major  parade in the United States in over a year,” he said.

Rey Feo Thomas Aguillon and members of his royal court also were special guests at the ceremony.  He helped crown the Fiesta Teen Princess Isabella Nino.   The 18-year-old senior at Alamo Heights High School has been accepted into the College of Science and Engineering at Texas Christian University.