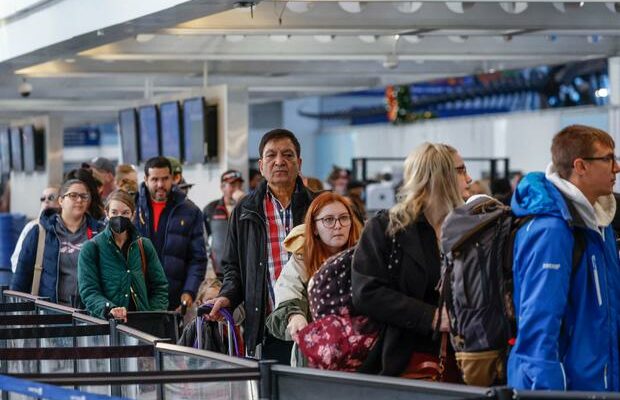 FILE: Travelers stand in a security line at O'Hare International Airport in Chicago, Illinois, on November 22, 2022, ahead of the upcoming Thanksgiving holiday. KAMIL KRZACZYNSKI/AFP via Getty Images

The Department of Homeland Security (DHS) announced Monday the new deadline will be May 7, 2025, allowing Americans more time following delays caused by the COVID pandemic. The old cutoff was slated for May 3, 2023.

Americans wishing to trade their license or ID in for a compliant Real ID, which has a star symbol at the top of the card, must undergo a more stringent ID check during application. According to DHS, security features on Real IDs are designed to prevent counterfeiting and fraud, using documentary evidence and record checks to confirm travelers are who they claim to be. The Real ID will be required by travelers 18 or older to board a plane, enter a federal building or a military base. Passports, military IDs or Global Entry cards also will qualify to pass through airport security.

The Real ID Act was passed in the wake of the 9/11 terrorist attacks after several of the hijackers improperly obtained state IDs. All 50 U.S. states, the District of Columbia, and four of five U.S. territories are covered by the REAL ID Act.

Under the law, following the enforcement deadline, federal agencies, including the Transportation Security Administration (TSA), will not accept driver’s licenses and identification cards that do not meet REAL ID standards.

Over the past decade, REAL ID enforcement has repeatedly stalled after states failed to comply with the security requirements for issuing the updated driver’s licenses. But officials say this time, it’s the COVID-19 pandemic that’s at fault, preventing Americans from accessing state motor vehicle departments to retrieve the updated identification. According to DHS, Real ID progress over the past two years has been “significantly hindered” by backlogs at state driver’s licensing agencies created by the pandemic.

According to a DHS official, states have primary responsibility for increasing the REAL ID adoption rate, which currently stands at 52%, according to state-provided data.

Secretary of Homeland Security Alejandro Mayorkas said in a statement Monday that the extension “will give states needed time to ensure their residents can obtain a REAL ID-compliant license or identification card,” adding, “DHS will also use this time to implement innovations to make the process more efficient and accessible.”