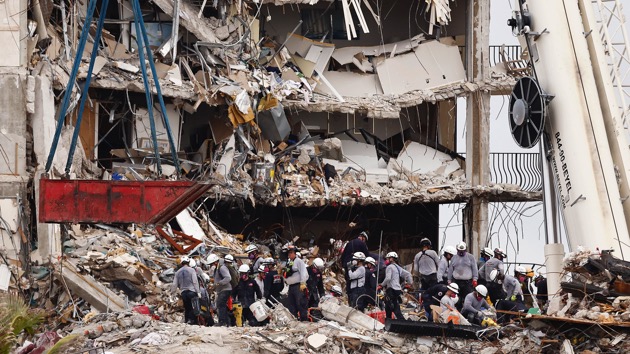 SURFSIDE, FLORIDA - JUNE 30: Search and rescue teams look for possible survivors and remains in the partially collapsed 12-story Champlain Towers South condo building on June 30, 2021 in Surfside, Florida. Over 100 people are being reported as missing as the search-and-rescue effort continues. (Photo by Michael Reaves/Getty Images)

(SURFSIDE, Fla.) — The remains of the partially collapsed condo building in Surfside, Florida, were demolished at around 10:30 p.m. Sunday night.

Earlier Sunday, police had urged citizens who live within the designated shelter-in-place area, between 86th Street and 89th Street and Abbott Avenue and the shoreline, to remain indoors “effective immediately,” warning about dust from the demolition.

Some residents and animal welfare advocates had expressed concerned about the fate of pets left behind in the partially collapsed tower and the demolishing of the structure. But there are no animals remaning in the building, mayor of Miami-Dade County Daniella Levine Cava said during a news conference Sunday evening.

“As an animal lover and a pet owner myself my entire life, I have made it a priority since day one to do absolutely everything possible to search for any animals that may still in the building. And in the days since the collapse, the Miami-Dade Fire Rescue Team has conducted three full sweeps of the place, including searching in closets, under beds, and all the other places that they could to see an animal that might have been in hiding … The latest information we have is that there are no animals, remaining in the building,” Levine Cava said.

The mayor also advised residents of nearby buildings to “close your windows, put your air conditioning on recirculation” in the case of dust of other fallout from the demolition. However, she said: “It is not expected anything other than some light debris would potentially affect all those buildings.”

Mayor of Surfside, Charles Burkett, called Tropical Storm Elsa predicted to hit the area, a “blessing in disguise ” because it inititated the discussion to demolish the remaining part of the building.

“That discussion has accomplished several things. It’s eliminated a looming threat, a dangerous threat for our rescue workers. It will potentially open up probably a third of the pile so we can all, you know, so the teams can focus not just on two thirds of the pile, but on the whole thing, which is important. And, you know, we want to make sure that we control which way the building falls and not, not a hurricane,” Burkett said.

Miami-Dade Fire Chief, Alan Cominsky said that once the building comes down, “there’ll be several different features that we’ll have to address obviously with the demolition and that’ll be the priority and securing the scene in that sense.” Afterward, the rescue mission will continiue, Cominsky said.

The partial collapse occurred around 1:15 a.m. on June 24 at the Champlain Towers South condominium in the small, beachside town of Surfside, about 6 miles north of Miami Beach.

Approximately 55 of the oceanfront complex’s 136 units were destroyed, according to Miami-Dade Fire Rescue Assistant Chief Raide Jadallah. Since then, hundreds of first responders have been carefully combing through debris in hopes of finding survivors.

As of Sunday, the death toll has risen to 24 people. Rescuers were still searching for 121 people as of Sunday afternoon.

A letter from the board of directors of Champlain Towers East, obtained by ABC News, told residents on Sunday that they didn’t know when the other building would come down but “the most common estimate is sometime early evening today.”

The board advised residents to evacuate as soon as possible to avoid traffic.

Levine Cava said other residents nearby wouldn’t need to evacuate but were urged to stay indoors, close their windows and turn off their air conditioners to keep out dust from the demolition.

She said the demolition will be in the form of an “energetic felling,” which “uses small, strategically placed detonations and relies on the force of gravity to bring the building down in place, right on this footprint.”

Search and rescue teams will continue with their operations, “very shortly after the demolition,” Levine Cava added.

The mayor also noted that the all of the crews are working to get as much work done before Tropical Storm Elsa arrives.

Preparations are now being made for Elsa, which weakened from a hurricane in the morning and is expected to come near southern Florida on Monday, into Tuesday. A cover has been placed on the part of the debris field that is closest to the building, Cava said.

On Saturday, Gov. Ron DeSantis declared a state of emergency for several counties in anticipation of Elsa. Heat, humidity, heavy rain, strong winds and lightning storms also have made the conditions difficult for rescuers, periodically forcing them to pause their round-the-clock efforts in recent days.

Two bodies were discovered Thursday evening, including that of a 7-year-old daughter of a Miami firefighter, according to Levine Cava. The firefighter was not part of the crew that discovered the girl’s body.

“It goes without saying that every night since this last Wednesday has been immensely difficult,” Levine Cava said during a press briefing in Surfside on Friday morning. “But last night was uniquely different. It was truly different and more difficult for our first responders.”

Meanwhile, 191 people who were living or staying in the condominium at the time of the disaster have been accounted for and are safe, according to Levine Cava, who has stressed that the figures are “very fluid” and “continue to change.”

The number of those accounted for has gone up as detectives continue to audit the list of people reported missing, a development that Levine Cava called “very good news.”

However, no survivors have been discovered in the rubble of the building since the morning it partially collapsed, and the hope that more people would be found alive appeared to be fading Friday.

Miami-Dade County Fire Chief Alan Cominsky said rescue workers are “emotional” after the discovery of a first responder’s own daughter, which “takes a toll.” But he said that won’t stop them from continuing to search for those who are still missing.

“I just was hoping that we would have some survivors,” Cominsky said at a press briefing on Friday morning.

Speaking on the signing the emergency order to demolish the remainder of the building earlier this week, Levine Cava said the move will “help us move quickly.”

The structure was cleared by crews last week, and all search and rescue resources have since been shifted to focusing on the pile of rubble. But the two sites are side-by-side and the remaining building has posed challenges for the rescuers trying to locate any survivors or human remains in the wreckage.

“Given our ongoing safety concerns about the integrity of the building, we’re continuing to restrict access to the collapse zone,” Levine Cava said during a press briefing in Surfside on Thursday evening.

President Joe Biden and first lady Jill Biden traveled to Surfside on Thursday to meet with officials, first responders, search and rescue teams, as well as families of the victims. Recalling the 1972 car accident that killed his first wife and 1-year-old daughter as well as badly injuring his two sons, the president told reporters: “It’s bad enough to lose somebody but the hard part, the really hard part, is to not know whether they’ll survive or not.”

The cause of the partial collapse to a building that has withstood decades of hurricanes remains unknown and is under investigation.

Built in the 1980s, the Champlain Towers South was up for its 40-year recertification and had been undergoing roof work — with more renovations planned — when it partially collapsed, according to officials.

A structural field survey report from October 2018, which was among hundreds of pages of public documents released by the town of Surfside late Sunday, said the waterproofing below the condominium’s pool deck and entrance drive was failing and causing “major structural damage to the concrete structural slab below these areas.”

A slew of lawsuits against the Champlain Towers South Condo Association have already been filed on behalf of survivors and victims, alleging the partial collapse could have been avoided and that the association knew or should have known about the structural damage. A spokesperson for the association told ABC News they cannot comment on pending litigation but that their “focus remains on caring for our friends and neighbors during this difficult time.”

The association’s board released a statement Friday saying its surviving members “have concluded that, in the best interest of all concerned parties, an independent Receiver should be appointed to oversee the legal and claims process.”

“We know that answers will take time as part of a comprehensive investigation,” the statement continued, “and we will continue to work with city, state, local, and federal officials in their rescue efforts, and to understand the causes of this tragedy.”

In the wake of the Surfside building collapse, the city of North Miami Beach ordered that another condominium close immediately amid safety concerns connected to the 40-year recertification process, officials said.

The Crestview Towers Condominium is “structurally and electrically unsafe,” based on the review of a recertification report submitted Friday, city officials said in a statement.

“The city of North Miami Beach has taken the steps that we recommended to review to make sure that the recertification process was being done in a timely basis. And as I understand it, as a result of that audit, they found a building that had not been recertified, and when the information came in, they took some steps,” Levine Cava said Friday evening.

Some 300 residents have to evacuate, according to ABC Miami affiliate WPLG, while a full structural assessment is conducted.