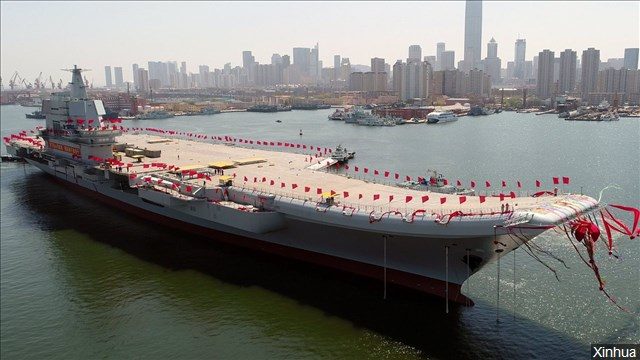 BEIJING (AP) — A report says two Chinese fighter jets buzzed a Canadian warship operating in international waters in the East China Sea at a time of heightened tension between Beijing and Ottawa.

Fisher, who was aboard the ship, said the display was more aggressive than previous encounters between the Canadian navy and Chinese warplanes, but was not considered dangerous. Fisher didn’t say when the incident occurred, although his report on the institute’s website was dated Tuesday.

“This was not a dangerous scenario but it is one that we certainly paid close attention to,” Regina’s captain, Cmdr. Jake French, was quoted as saying. “I will not characterize their intent, but we have seen a lot of ‘fast air’ over the past week flying from where many of their bases are.”

The event comes amid Chinese fury over Canada’s arrest of Meng Wanzhou, the chief financial officer of Chinese tech giant Huawei, in December at the request of the United States. Meng, who is also the daughter of Huawei’s founder, is under house arrest in her Vancouver mansion.

In apparent response, China has arrested two Canadians for alleged spying, sentenced another to death for drug smuggling, and this week suspended imports of Canadian meat products.

Fisher wrote that the ship had been followed for weeks by Chinese destroyers, frigates, corvettes and coast guard cutters as it traveled through the disputed South China Sea, which China claims virtually in its entirety, through the Taiwan Strait and into the East China Sea.

However, French was quoted as saying that relations at sea with the Chinese military had been “professional and cordial.”

China’s defense ministry on Thursday said it had closely followed the passage of the Regina and its replenishment ship, MV Asterix, through the Taiwan Strait.