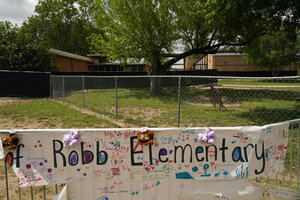 A sign with encouraging messages hangs at a memorial at Robb Elementary School created to honor the victims killed in the recent school shooting, Thursday, June 9, 2022, in Uvalde, Texas. The Texas elementary school where a gunman killed 19 children and two teachers has long been a part of the fabric of the small city of Uvalde, a school attended by generations of families, and where the spark came that led to Hispanic parents and students to band together to fight discrimination over a half-century ago. (AP Photo/Eric Gay)

UVALDE, Texas (AP) – Documents examined by the Austin American-Statesman and KVUE-TV show armed police officers stood in a Uvalde elementary school hallway with at least one ballistic shield within 19 minutes of a gunman arriving at the school, where he killed 21 people, 19 of them children.

The outlets’ report, which did not indicate the source of the documents, nevertheless intensifies the anguish and questions over why police didn’t act sooner to stop the May 24 slaughter in the Robb Elementary School classroom.

The outlets reported that gunfire could be heard as much as 29 minutes before officers entered the classroom and killed the gunman.