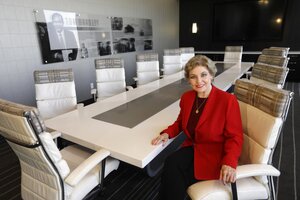 FILE - Betsy Berkhemer-Credaire, CEO of 50/50 Women on Boards, in the Tom Bradley Conference Room at City Club LA in downtown Los Angeles, Sept. 3, 2021. U.S. companies have been slow to add women to their boards of director this year as the pandemic and a difficult economy shift priorities, according to an annual report by the advocacy organization 50/50 Women on Boards, which was released Thursday, Sept. 29, 2022. (Genaro Molina/Los Angeles Times via AP, File)

NEW YORK (AP) — U.S. companies have added women to their boards of director at a slower pace this year compared with last year as the pandemic and a difficult economy shift priorities, according to a new report released Thursday.

Women have continued to make gains, now holding a record 28% of board seats on the Russell 3000 index of publicly traded companies, according to an annual report by the advocacy organization 50/50 Women on Boards, which used data from executive data firm Equilar.

That’s a 2.4% jump from the 25.6% of seats held by women in 2021, but the pace was slower than the 3% rise seen the previous year. And during the first half of 2022, the share of new seats going to women declined by 8 percentage points compared to the preceding six months.

Companies have responded in recent years to pressure from politicians and investors to appoint more women and minorities to their boards, which continue to be overwhelmingly male and white.

Betsy Berkhemer-Credaire, chief executive officer of 50/50 Women on Boards, cited California’s landmark law requiring a certain number of women on boards. But that law was ruled unconstitutional by a Los Angeles judge in May because it violated the right to equal treatment. Supporters have nonetheless credited it with bolstering the ranks of on company boards in California and beyond.

California companies have the biggest representation of women directors in the country, at 34.1% — a 4.8% increase over 2021, according to the report. Companies in Washington state, which now has a similar law, have the second highest at 30%.

When comparing industries, energy and financial services companies had the fewest share of women on boards at 23% and 26%, respectively. Utilities had the most at 32%.

Companies have increased their gender parity mostly by expanding their boards, rather than replacing men with women. Nearly two-thirds of seats that went to women in 2022 were newly added positions, the report said.

The report said the slower pace of progress suggests companies are contending with competing priorities, including a volatile economy, the pandemic and pressure to meet other social, environmental and governance goals, such as commitments to fight climate change.

But Berkhemer-Credaire said she is optimistic that companies remain on track to achieve gender equality in the near future. At the current pace, companies would achieve gender parity on their boards in 10 years.

“The numbers are increasing. That’s important to note,” said Berkhemer-Credaire. “I’m not discouraged at all.”

Achieving racial diversity has proved more difficult, in part because it is has been difficult get data on the number of minority directors.

In May, Equilar study released its first racial breakdown of boards for Russell 3000 companies, pulling from disclosures from companies, data from affiliate networks and lists of influential executives from racial and ethnic minorities. The survey found only 6.2% of directors are Black and 5% are of Asian or Pacific islander descent. Just 2.7% of directors were Hispanic.