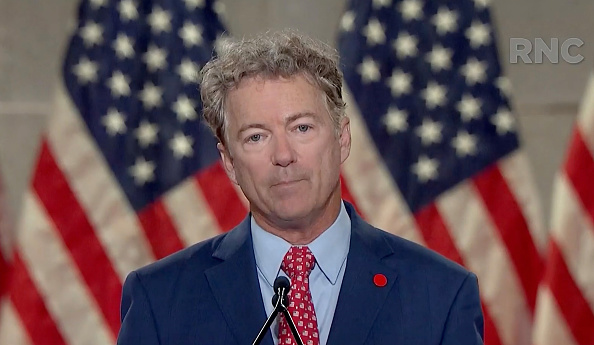 CHARLOTTE, NC - AUGUST 25: (EDITORIAL USE ONLY) In this screenshot from the RNC’s livestream of the 2020 Republican National Convention, U.S. Sen. Rand Paul (R-KY) addresses the virtual convention on August 25, 2020. The convention is being held virtually due to the coronavirus pandemic but will include speeches from various locations including Charlotte, North Carolina and Washington, DC. (Photo Courtesy of the Committee on Arrangements for the 2020 Republican National Committee via Getty Images)

First elected in the tea party-driven wave of 2010, Paul’s victory extended a long GOP winning streak in Kentucky Senate races. The Bluegrass State hasn’t elected a Democrat to the Senate since Wendell Ford in 1992.

Booker was the first Black Kentuckian to run as the state’s Democratic nominee for the Senate, but his trailblazing campaign came up short against Paul. It was Booker’s second bid for the Senate. In 2020, he barely lost the Democratic Senate primary to an establishment-backed rival routed that year by Republican Sen. Mitch McConnell in the general election.

Paul has gained a national voice in promoting limited government and restraint in U.S. foreign policy. One of the Senate’s most contrarian voices, he also denounced what he views as government overreach in responding to the COVID-19 pandemic.

“We come together under the belief that government is instituted among men and women to preserve our God-given freedom, period,” Paul said. “Our desire is not to rule over others, but to largely leave people alone.”

Paul also called for a lowering of the nation’s political temperature coming out of the election.

“It is my hope that as our nation moves forward, the anger, the vitriol and even the death threats will abate,” he said. “Surely there is common cause in the concept that a limited, constitutional government allows people from all walks of life to live peacefully together.”

After a dozen years as senator, Paul has regularly gone his own way, even putting himself at odds with his own party. The outspoken conservative has railed repeatedly against socialism, foreign aid and what he sees as excessive spending that he blames for driving up the nation’s debt.

Paul defied leaders of both parties this spring when he briefly delayed Senate approval of an additional $40 billion to help Ukraine withstand Russia’s invasion. Paul wanted language inserted that would have an inspector general scrutinize the new spending. Paul has voted against federal farm bills — vitally important for Kentucky’s agriculture sector — balking at the cost and its food aid sections.

The two candidates offered starkly different approaches to politics in GOP-trending Kentucky. Nationally, the outcome figured into the count for determining which party would control the Senate for the rest of Democrat Joe Biden’s term as president.

Booker, a former state lawmaker, promoted such social programs as Medicare for All and a basic universal income. He sought broad voter support with his “hood to the holler” campaign plank, vowing to uplift poor urban neighborhoods and struggling rural communities alike. He also backed criminal justice reforms.

In 2020, when he narrowly lost the Democratic Senate primary and a bid to face McConnell, Booker’s racial and economic justice message garnered him attention amid nationwide protests over the deaths of Black Americans in encounters with police.

The candidates’ differences aside, a pair of social media ads brought controversy to the campaign.

Shortly before a TV debate that Paul declined to take part in, he released a video that claimed Booker “doesn’t believe in civil discourse, only violence” and falsely conflated an attack years ago on Paul by a neighbor with violence during social protests that Booker had nothing to do with. Paul had several ribs broken and eventually underwent lung surgery for injuries he suffered when his neighbor slammed into him outside his Kentucky home in 2017. Earlier that year, Paul took cover when a gunman opened fire while GOP members of Congress practiced for a charity baseball game.

The video also accused Booker of associating with members of the “radical left” who it said condone and perpetrate violence. Booker responded that Paul was using “racially charged dog whistles” and said the ad had “dangerous and dishonest rhetoric.”

Booker appeared in an online ad with a noose around his neck to draw attention to Paul’s position on anti-lynching legislation. The ad zeroed in on Paul’s efforts to stall the legislation in 2020. At the time, Paul said the bill was drafted too broadly and could define minor assaults as lynching. The ad failed to mention that Paul co-sponsored a new version of the bill that cleared Congress and was signed into law by Biden.

Check out https://apnews.com/hub/explaining-the-elections to learn more about the issues and factors at play in the 2022 midterm elections.