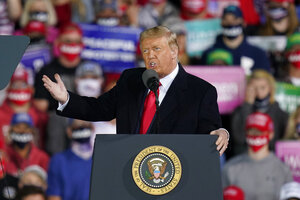 The Republican Party has cut into Democrats’ advantage in voter registration tallies across some critical presidential battleground states, a fact they point to as evidence of steady — and overlooked — enthusiasm for President Donald Trump and his party.

Even though Trump trails in national polls and struggles with fundraising with just weeks before Election Day, Republicans see their progress signing up voters in Florida, Pennsylvania, Arizona and other states as a rare bright spot. Democrats appear to have been set back by their decision to curb in-person voter registration drives during much of the pandemic. And in something of a reversal, Republicans are crowing about their success bringing in new voters who could ramp up turnout and deliver the White House to their candidate.

“The best thing for voter registration is enthusiasm for a candidate and the infrastructure,” said Nick Trainer, director of battleground strategy for Trump’s reelection campaign. “The lack of enthusiasm for Biden coupled with the lack of structure is the reason they’re not doing what they did in the past.”

In Florida, Republicans netted 146,644 voters over Democrats since the pandemic hit in March, leaving Democrats with their smallest overall lead in party registrations since the state began tracking them in 1972. In Pennsylvania, which Trump won with 44,000 votes in 2016, the GOP added 103,171 more voters since November than Democrats did.

Even in Arizona, where Democrats have steadily been chipping away at the GOP’s advantage among registered voters due to a growing number of young Latinos voters, Republicans added 30,000 more voters than Democrats since mid-August.

Democrats argue that Republican gains are partly illusory: Some of the GOP registrants are former Democratic voters who have been voting for Republicans, but have not updated their registration until now. They also note young voters, who lean heavily Democratic, increasingly register as unaffiliated with either party, which helps pad the GOP’s advantage on paper but it might not help on Election Day,

David Bergstein, a spokesman for the Democratic National Committee, said Republicans were “cherry picking” voter registration statistics. Still, he noted: “Democrats are taking nothing for granted and pulling out all the stops to reach every voter we need.”

Voters can still sign up to vote in a handful of states and several, including the key battlegrounds of Michigan, Minnesota and Wisconsin, allow voters to sign up to vote on Election Day.

Even as society has opened back up since March, registrations are 38% lower than they were during a comparable stretch in 2016, according to a report from the Brennan Center for Justice. Experts note that a registration drop-off of that size disproportionately hurts young, urban and minority voters — voters that tend to lean Democratic.

Democrats were starting ahead of Republicans. They’ve had success registering new voters through much of the Trump administration. Their gains after Trump’s election helped lead to their success flipping the House of Representatives in an election with record young voter participation rates — a sign, they argue, that their pre-pandemic work will pay off in November.

Since the outbreak, things have been harder for Democrats and the wide array of nonprofit groups that work to sign up new voters. These organizations have been hesitant to resume face-to-face interactions. The Biden campaign only resumed some this month while Republicans have not been as shy — they began going back into the field this summer.

“They ceded the playing field,” Trainer said of Democrats.

In Arizona, online registration efforts don’t have the same impact as in person ones, said Alejandra Gomez, co-executive director of the Latino organizing groups Living United for Change in Arizona and the Arizona Center for Empowerment.

“While we were seeing an increased number in online participation, it’s still not the same as face-to-face work and being able to have a conversation with a person,” Gomez said.

Still, Democrats feel good about their position in the state. Data analyst Sam Almy said that, of the 66,000 voters added to the rolls since August who don’t register with either party, half are 35 or younger, a key Democratic demographic.

In Pennsylvania. Republicans have been steadily gaining on Democrats since Trump’s election. Democrats in the state acknowledge the president has a striking appeal to many longtime members of their party who may be switching to the GOP. “Donald Trump is a singularly, unique personality,” said John Fetterman, the state’s Democratic lieutenant governor. Fetterman noted that despite the attrition in registration numbers, Democrats won the state’s Senate and gubernatorial races in 2018.

In Nevada, where Democrats routinely out-register Republicans in the run-up to elections, the GOP has bested Democrats for at least five months since the pandemic hit. In North Carolina, where a competitive Senate race could determine which party controls the upper chamber, Republican registration has leapt by 51,381 over Democratic since mid-March.

In Florida, Democrat Hillary Clinton lost the state when her party’s registration advantage was more than 320,000 in 2016. Its now about half of that. But Democrats note that there’s been an even larger increase in new voters who decline to register with either party.

Steve Schale, a veteran Florida Democratic strategist who’s complained publicly about his party’s failure to keep up with the GOP in registrations, said during a call with reporters Monday that those unaffiliated voters are overwhelmingly young and people of color.

AP’s Advance Voting guide brings you the facts about voting early, by mail or absentee from each state: https://interactives.ap.org/advance-voting-2020/.

This story has been corrected to show the director of battleground strategy for Trump’s reelection campaign is Nick Trainer, not Nick Trainor.